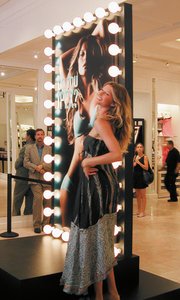 The Body by Victoria collection was one of the biggest sellers for lingerie and beauty retailer Victoria’s Secret, according to company spokesperson Sara Tervo. On Aug. 1, Victoria’s Secret made a gambit to extend the popularity of the collection, which debuted in March, with the “IPEX Demi” bra. Part of the celebrations included a visit by supermodel Gisele Bundchen to the Victoria’s Secret store at The Grove shopping center in Los Angeles.

“We expect this to be a big seller,” Tervo said of the demi bra, which features the full attributes of the regular “IPEX” bra. Constructed out of a microfiber material, the “IPEX” bra has the comfort of a sports bra but avoids nipple show-through, according to the company. The demi bra provides half the coverage of the original style. Price points for the new bra range from $45 to $47.

Victoria’s Secret’s comparative-store sales were flat in June, but the retailer said it hopes to increase sales by offering more variety. Tervo said the company is extending its selection of third-label brands, including English activewear collection Shock Absorber, Italian lingerie line Intimissimi and Paris-based Chantal Thomass. The Victoria’s Secret store at The Forum Shops at Caesars in Las Vegas added a storefront for Chantal Thomass in May.