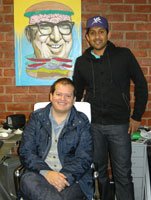 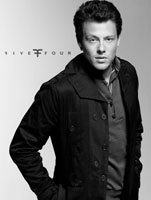 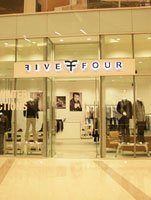 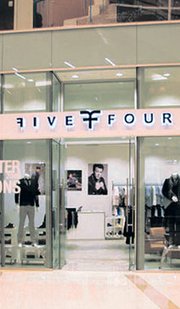 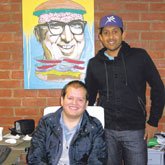 Stepping into the corporate offices of Los Angeles apparel maker Five Four is much like entering a college dorm.

The average age of employees at the 7-year-old company is 27. Business meetings consist of everyone cramming into one room, some plopped onto the floor, others balanced on the edge of a desk to fit into one of the office’s spaces.

Visitors in the front room are greeted by two white chairs missing part of their upholstery, revealing tattered and yellowed foam-rubber seat cushions. The upholstery disappeared last summer when a 25-year-old production assistant went on a go-kart joy ride in the parking lot and crashed into a wall. He broke more than 25 bones. The cushions were used to prop up his bleeding head until an ambulance arrived.

“He almost died,” recalled Andres Izquieta, co-chief executive and creative director of the contemporary menswear line, hatched in 2001 when Izquieta and his partner, Dee Murthy, were University of Southern California seniors.

Since the beginning, the company owners have been on an entrepreneurial rollercoaster ride, changing with the trends and the economy. Never has that ability to adapt been more important than now. The apparel and retail scene is changing faster than autumn leaves, and businesses have to adjust with them. “If you don’t move on the train, you are going to be left behind,” Izquieta explained.

When the streetwear scene grew crowded, Five Four revamped its merchandise to have a more modern, contemporary look for hip guys. Marketing consists of ultra-modern methods such as YouTube posts, blogs, product placement on popular TV skateboarding shows and using young celebrities for publicity. When Cory Monteith, one of the principals of the hot Fox TV program “Glee,” was brought to Five Four for some clothing advice, the young executives hopped on the connection and enrolled him as the face of Five Four’s Fall/Winter 2009 collection. Joining the chain gang

Now that the sluggish economy has pinched credit lines, retailers are heavily discounting goods to lure customers through the front doors. In response, Izquieta and Murthy are abandoning their wholesale business to retail customers and opening their own chain of Five Four stores to carry only their goods. They are giving up selling their clothing to other emporiums, such as Macy’s, Nordstrom, Metropark, Atrium and Up Against the Wall, which have carried the label.

“With retail being so bad the first half of the year and getting worse the third and fourth quarter, we decided this summer to get aggressive about our intention of opening stores,” Izquieta said.

The coup de gracirc;ce for Five Four was last fall, when they were shipping to a major department store asking for some heavy markdown money to discount goods. “It put me in an awkward position. I made no money from that customer, but I had to ship just as a means to push my goods,” Izquieta said.

That helped nudge them into their retail plan. “We learned this year that the future of multi-brand, mall-based retailers is going to be a tough business going forward,” Murthy said.

Brent Schoenbaum, a partner in the retail practice of Deloitte & Touche in Los Angeles, said big retailers are getting selective about what they display on the floor and how much merchandise they show. “Nordstrom and Macy’s and the department-store people are focused on the bottom line,” Schoenbaum said. “They are looking at profitability by categories, and oftentimes the amount of space they are able to use to display a small boutique apparel manufacturer limits the ability for them to gain a lot of success in those locations.”

Five Four is following in the footsteps of other Los Angeles labels that have decided to explore the retail world. At American Apparel, known for its T-shirts and knitwear, the company’s more than 270 stores worldwide now account for nearly 70 percent of the third quarter’s net sales of $150.3 million.

True Religion has been aggressively adding stores, which by Sept. 30 numbered 66 in the United States versus 36 last year. Direct-to-consumer sales made up 40 percent of the blue-jeans company’s third-quarter net sales of $82.4 million.

Five Four opened its first store Oct. 8 at the revamped Westfield Culver City mall. During the first week, the store sold 900 pieces, including shirts, pants, jackets and knit tops. “We sold more pieces in one store than we did at 30 Macy’s stores nationwide,” Izquieta noted.

With that success, Five Four made a last-minute decision to open a second store at the Westfield Century City mall in time for the holidays on Black Friday, Nov. 27. The company spent only 96 hours before the store’s opening to decorate and merchandise the 2,900-square-foot space in the old Max Mara spot, located next to the H&M outlet. Sales for 2010 for the Century City store are predicted to be $1.8 million.

In keeping with their cool hipster customer, ages 25 to 40, the stores are sleek and clean with simple architectural lines, large windows, neutral colors and mid-century furniture.

It is a theme that will be used in the five stores the company hopes to open next year in Washington, D.C., Atlanta, Las Vegas, San Francisco and New York. The dream is to become the next big international retail chain. “We see our stores as a new-age American version of Zara and H&M,” Murthy said.Tough times means getting tougher

The recession has been an eye-opener for Izquieta and Murthy, two Los Angeles natives who have been buddies since their freshman year. They said their business has changed more in the last six months than in the previous 6frac12; years.

But they pride themselves on adapting rapidly. “They have worked as hard as anyone could work to get this thing launched,” said Tom O’Malia, their former USC entrepreneur professor. “They were smart enough to change as customers’ needs changed.”

When the economy was growing dismal at the beginning of this year, the young executives made a quick decision in March to move from their 10,000-square-foot office at Porter Street and Santa Fe Avenue in Los Angeles to an 8,000-square-foot office on Washington Boulevard. The 60 percent reduction in rent is less of a burden on this year’s projected $8 million in revenues, which are flat from last year. Revenues in 2007 were $6.5 million. The bottom-line reduction might help Murthy keep his 2008 Aston Martin Vanguard, which sells for more than $100,000.

They also felt they had to diversify and start sketching out a game plan for various lines that don’t compete with each other. In August, they partnered with skateboarder Chris “Drama” Pfaff, who appears on the MTV show “Rob Dyrdek’s Fantasy Factory,” to do a T-shirt and sweat-shirt line called Young & Reckless. Dyrdek is a professional skateboarder and is Pfaff’s cousin.

The line was introduced on the TV show and started flying off the shelves, Izquieta said. It is sold at Pacific Sunwear, Tilly’s and Zumiez, with projected sales of $8 million to $9 million in 2010.

Next on the drawing table is a juniors line debuting in March. It will be a beach-oriented, casual line of T-shirts retailing for $20 to $30 and fleece items selling for $40 to $55, the same price points as Young & Reckless. Again, Five Four will partner with a young celebrity to catch the youth crowd.

And in September, Five Four is launching an apparel line in India, using a British music star of Indian origin to promote the yet-to-be-named label.

“The line is going to be a simpler, cleaner version of Five Four, more wearable to a mass audience and priced for a mass audience,” said Murthy, whose parents are from India. Incubating an idea

Izquieta and Murthy may be only 29 years old, but they have been hacking away at growing their venture ever since they devised a business plan for a USC class while sitting in their room.

“Literally, I can remember the day: Dec. 15, 2001. I knew that day was going to change the rest of our lives. We said to one another, ’This is going to be the biggest brand in the world,’” said Izquieta, who still retains the enthusiasm of a student.

They were lucky enough to be mentored by Marcia Israel, the Los Angeles retail doyenne who started Judy’s, a chain of fashionable apparel stores for women, in a tiny 200-square-foot store.

When they graduated, they won the Marcia Israel Award for best student business plan. At the time, the award carried no monetary compensation.

With diplomas in hand, the business-school graduates officially launched Five Four at the MAGIC Marketplace in Las Vegas in August 2002. They built their booth in the backyard of Murthy’s parents. To jump-start their line, Izquieta and Murthy maxed out seven credit cards.

But that first MAGIC show wasn’t what they quite expected. “It was miserable,” Izquieta remembered, sitting in his office with his green sneakers propped up on the desk. “From a sales perspective, it was horrible. From an emotional perspective, it was the highest of the high. We were in the mix, and our company was real versus a dream.”

The first three days of the four-day event were quiet. They wrote only $7,000 in orders. “It was an eye-opening experience,” Murthy admitted. “But we met a lot of people and learned about the business and what we needed to do to come back stronger.”

The first two to three years were a struggle for the pair, but it taught them to survive, which is coming in handy these days.

“We are a scrappy bunch,” Murthy said with pride. “At the end of the day, this is far greater than a business to us. We are truly emotionally attached to it.”