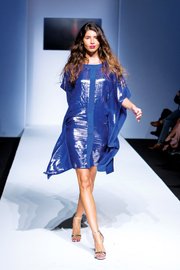 ROYAL FLUSH: The LA Fashion Week runways were awash in royal-blue shades as designers used the electric hue for women's and men's styles.

Attendees at the recently concluded Los Angeles Fashion Week could be forgiven for having “royals” on the brain. Not only was the popular song “Royals” by New Zealand musician Lorde well represented on the soundtrack at many events, the color was equally well represented in many of the collections shown on the runway.

“The color evokes optimism and confidence, but we also felt that it was a color that looks radiant on many different ethnicities,” Sude said. “It’s been an important factor with our cosmetic and accessories customers [and] looks like a fabulous ‘neutral’ in handbags.”

Plus, Sude said, the color has legs.

“We feel that the color will carry through to Fall ’14 and beyond,” she said. “It will need to be surrounded with other colors to make the color continue to retail going forward. Ultimately, it’s not about the individual color but the color combination.”

For more examples of royals on the runway at LA Fashion Week, see LA Spotlight.