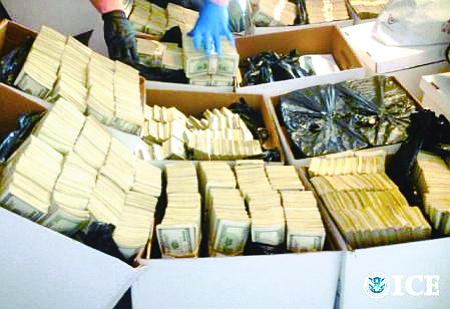 All this cash comes from a money-laundering scheme between two Mexican drug cartels and several Los Angeles clothing and textile importers.

Messengers would drop off large sums of cash at a garment company. The garment company would use the money to buy clothing or fabric in overseas factories. The clothing and goods ultimately ended up in Mexico, where they were sold for Mexican currency and kept by the cartels.

The investigation into money laundering was months in the making, beginning in May 2013. Federal agents used confidential informants to identify money brokers who were dropping cash to fashion-district businesses. Undercover agents then started posing as the money droppers to get an inside view of what was happening.

Days after the September raid, federal officials posted a seizure notice for an $8 million mansion in Pasadena, Calif., whose owner is listed as Nancy Yih, president of LA Idol Fashion.