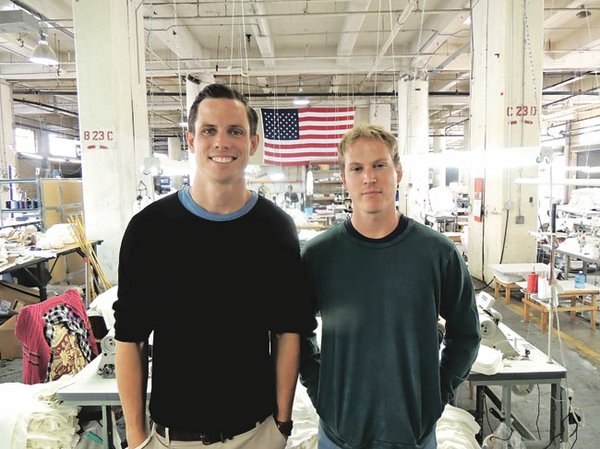 Basics on a Local Mission

When Robert Lohman and Matt Boelk started the Los Angeles–based Groceries Apparel brand in 2010, they were advised that they could not launch their type of business—a vertically manufactured eco-basics brand. Critics said it was too niche and too expensive to build. Just one mistake could cripple the whole venture. Their advisers were almost right.

In 2011, a fabric supplier sent Groceries $100,000 in damaged goods at a time when the label was surviving from order to order. The garments made from the damaged fabric could not be sent out to their retailers. Lohman and Boelk were unable to make payroll. Lohman remembers gathering his 15 employees and telling them that there were not going to be paychecks by the end of the day. He expected them to leave en masse.

But the next morning, all 15 employees were working at their stations, making the label’s basics fashions. They told him that they were glad to have their jobs and that they would sweat out a tough time with him. Boelk managed to sell $100,000 in other goods, which was enough to make the next payroll, and the company survived.

Going into the 2014 winter season, the Groceries business is on a much more even keel. Lohman forecast that Groceries’ 2014 sales will increase 30 percent in a year-over-year comparison. Lohman and Boelk run the Groceries brand out of a 33,000-square-foot factory adjacent to the American Apparel compound in downtown Los Angeles. The company now employs 70 people at the factory.

High-marquee retailers such as Kitson, Planet Blue and Nordstrom’s etail site sell Groceries T-shirts, sweaters and jackets for men and women, as well as dresses, rompers, tops and bandeaux for women. The clothes are made out of ecologically minded fabrics such as organic cotton, hemp, recycled fabrics and closed-loop Tencel fabrics.

In the next two to five years, Groceries might move to a bigger building and might open a retail store, Lohman said. The company is currently growing because it offers a quality product and because its business model worked better than anyone predicted, he said.

Lohman and Boelk also expect this model of manufacturing to have a social impact. They believe that vertically manufacturing clothes with a sustainable edge can clean up what they view as an industry with manufacturing practices that hurt the environment. “We’re creating demand for organic textiles, and we’re creating jobs in LA,” Lohman said.

“We are proving this business concept and showing other brands that using only environmentally friendly fabrics and manufacturing exclusively in the U.S. is a viable option to gain mainstream success,” Boelk said.

Groceries is among a handful of vertical manufacturers of clothes made with eco fabrics in Los Angeles County. Rancho Dominguez, Calif.–based Nature USA has been manufacturing apparel with a sustainable edge since 1997. The company makes T-shirts for Ventura, Calif.–based sustainable brand Patagonia. NatureUSA’s services include cut and sew, knitting, dyeing and finishing, and it is certified by the Fair Labor Association, an international labor-rights organization, which has offices in Washington, D.C., Geneva, and Shanghai.

The business started with seed money from Lohman’s family members, but Lohman and Boelk could not get financing during the toughest days of the Great Recession or terms from fabric sellers, so Groceries got on a disciplined quick-turn schedule with delivery of selling and shipping made-to-order merchandise every month, with lead times of four to six weeks, Boelk said.

It was a schedule that fit well with post-recession business. Many retailers preferred to order merchandise with short lead times that could be fulfilled with a quick turnaround.

With money tight, Groceries had to do a lot of the work in-house, which the owners believe provides great cost savings. Since the brand is not sending out work to cutters and sewers, Groceries makes up a more than 30 percent margin on its goods, which gives it the funding to run the company without debt, Lohman said.

Companies such as American Apparel and NatureUSA have made an impact with vertical manufacturing models. But anyone trying out this model must be prepared, said Rob Greenspan, who consults on manufacturing with Greenspan Consult Inc.

“If the company has the expertise to be a vertical manufacturer—meaning they know how to cut, sew, trim, embellish and finish garments—then they have an opportunity to produce effectively for themselves,” Greenspan said. “But this does come at a cost to build and to maintain running a factory with equipment, technology and space rental and whatever else might be needed. The capital expenditures can be high to support the production piece of the business.”

Non-vertical manufacturing is sustainable and efficient, said Ilse Metchek, president of the California Fashion Association, a trade group based in Los Angeles. “The most efficient way is to let people do specialties. Leave it to the professionals,” she said.

She contends that the companies that have built an expertise in a certain field, such as cutting trim for T-shirts, have the most up-to-date machines and the most skilled staff, which efficiently makes a product that creates a lot of value.

Lohman and Boelk plan to continue finessing their business model. They met more than a decade ago at the University of California, Santa Barbara. They took geography classes, which offered an environmental perspective on the state of the world. They wanted to start a business in which they could make an environmental and a social impact, and they chose apparel.

In starting the business, they sometimes supported themselves with night jobs. They did a two-year stint of living at their factory and sometimes did not pay themselves to ensure that the kind of business they wanted to run had a chance at success. On their website (www.groceriesapparel.com), they posted a manifesto that contends that there’s a big future in vertical manufacturing with a sustainable edge. The manifesto reads:

“We are confident that our model and values are the future of apparel manufacturing, and we would rather go out of business than compromise.”