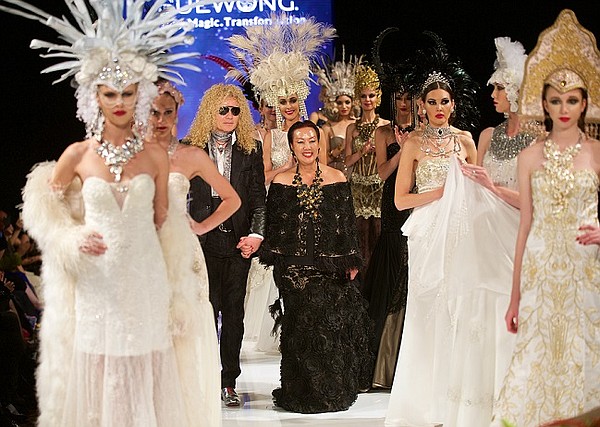 Sue Wong Dazzles With Her Designs

Who better to kick off a fashion week than Los Angeles designer Sue Wong - known for her opulent and intricately beaded gowns that evoke a bygone era. 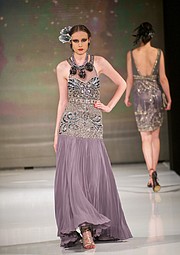 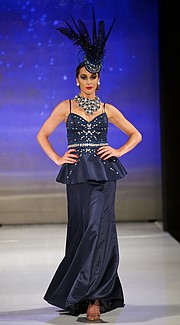 True to form, the Sue Wong fashion show Monday night at the Taglyan Complex in Hollywood offered some 80 looks that all had one thing in common - beautiful gowns with rich beading and luxurious fabrics. It was the first night of Art Hearts Fashion's four days of runway events.

The show, which started nearly 40 minutes late after a mass of people made their way into the chandelier-heavy ballroom - served up designs whose inspiration came from mythic goddesses.

For Pele, the goddess of fire, all the dresses were red. For Gaja, the goddess of the earth, most of the styles relied on earth tones and subtle platinums and charcoals. For the Medusa section, gowns grew darker - all based on black with fine embroidery and beading. For Aphrodite, the goddess of love, the colorway turned white with beaded bodices, lace skirts, bias-cut silhouettes and floral embroidered torsos.

No Sue Wong show would be complete without the fabulous hats that complete the outfits coming down the catwalk. As usual, they didn't disappoint.

The crowd was filled with fashion followers as well as a few celebrities. Actor Billy Zane, who starred in "Titanic" with Kate Winslet, sat in the front row as did musician Larry Dunn, from the group "Earth, Wind & Fire."

Walking down the runway with Sue Wong at the end of the show was British musician Steve Cooke, whose long blonde locks contrasted sharply with Sue's dark hair. 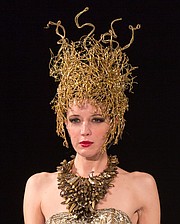 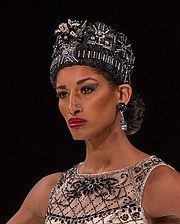