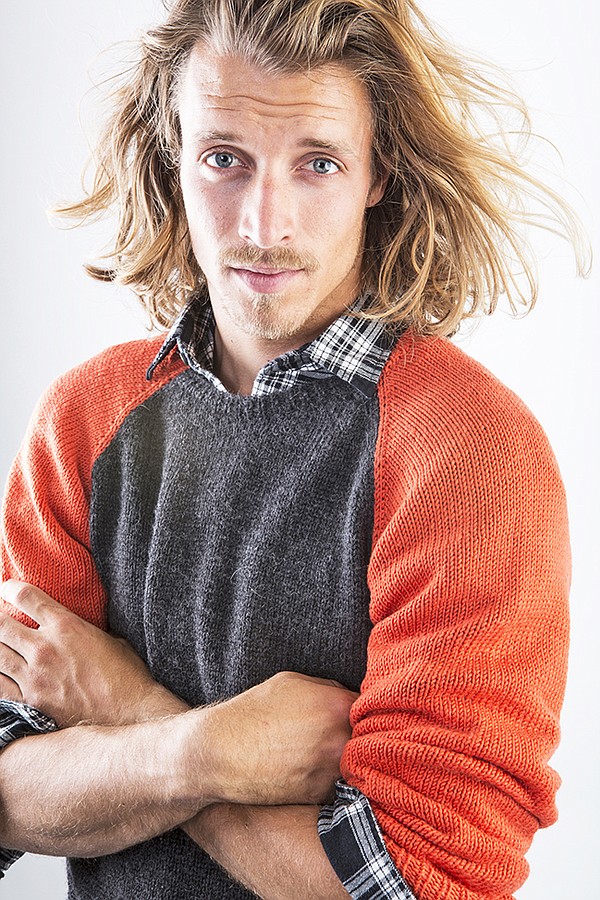 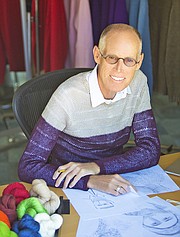 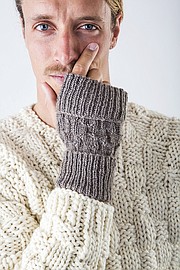 James Cox is looking to put knitting needles—and knit menswear designs—into the hands of home knitters with a collection of knitting kits.

“As an art form, knitting has found an audience, and artists are staging exhibitions at leading galleries, museums and unique events in public venues around the world. I am hopeful that my brand will fill what research has shown to be a gap within the knitting community—a lack of men’s knitwear patterns that are well matched with knitters’ preferences,” Cox said.

(Cox splits his time between Los Angeles and the Virgin Islands, but his company is based in Los Angeles.)

Each knitting kit includes yarn, a knitting-pattern brochure and schematics for creating the design. For the more-complicated styles, there is a row checker created to make the knitting process easier. Tools, such as knitting and darning needles, are not included, but the kits suggest which sizes to use for each style.

The kits collection consists of six sweaters and five accessories-style patterns. The sweaters include a sporty crewneck with contrasting sleeves, an all-over cable design, a basket-weave design and a chunky ski sweater. There is a pullover style with optional buttoned pleats at the waist and a linen sweater that mimics a white dress shirt with a neckband, collar, button cuffs and tails. The accessories include gym socks with a bright red toe, a reversible skull cap hat or ear warmer kit, fingerless gloves, an infinity scarf and a two-toned knit tie.

Most styles are available in a range of colors and yarns, including merino wool, lace-weight baby alpaca, hand-dyed cashmere and linen as well as cotton, silk and bamboo blends. The sweater kits are priced between $125 and $250, and the accessories kits range from $30 to $75.

“All of my life I have been intrigued by fashion design and construction,” Cox said. “I frequently stroll through designer boutiques examining the men’s knitwear ideas being presented in the season’s creations, feeling the fabrics, analyzing stitches and studying how they are constructed.” 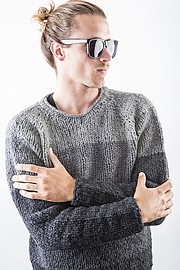 James Cox learned to knit as a child along with his three sisters. As an adult, he worked in advertising as a creative director for clients such as Apple, Disney, Yamaha, Neutrogena, Colonial Williamsburg, Northrop, Shimano, Four Seasons and the Islands of Tahiti. By day, he would create ad campaigns, but at night he found himself knitting sweaters for himself and gifts for family and friends, including hats, scarves, baby blankets and gloves.

“I always had a sweater project on needles,” he said. “Now, 37 years later, I have a closet full of sweaters that I designed and knitted.”

A few years ago, Cox began to think about launching a new business venture based on knitting. “It was becoming clear that given the choice I’d rather knit a sweater than create an ad campaign,” he said.

But Cox didn’t really envision himself as a fashion designer until three years ago while visiting Paris. He was in a men’s designer boutique when the owner approached him, asking who designed the sweater he was wearing. “I told him I designed and made it myself. He then handed me his card and said, ‘When you’re ready to launch your line, call me.’ I walked out of that boutique feeling I was indeed a fashion designer who could launch his own line of men’s knitwear.”

Cox started researching the market, surveying knitters across the country to determine how they felt about the men’s patterns that are currently available. “They [seem to] prefer patterns that are traditional, casual, tailored and fashionable,” Cox said. “Of those surveyed, 56.7 percent stated their satisfaction with men’s patterns was average and an additional 38.3 percent below average or poor.”

The knit kits were created to pair Cox’s designs with the ideal yarn so he could “partner” with knitters in the act of making sweaters. The kits are packed in a backpack-style project bag, which features a zippered pocket for carrying a ball of yarn and a hole to feed yarn though. He also developed the kit’s row checker to keep track of stitch counts, increases, decreases and other details row by row.

Cox connects with knitters on Ravelry (www.ravelry.com) a social community for knitters worldwide.

“Before the Internet, knitters connected via their local knitting shop,” Cox said. “Today, the little mom-and-pop-style knitting retailers are still at the heart of the knitting world. [However] knitters are taking advantage of the many social channels available to them. Just look at Ravelry, with hundreds of millions of page views, community members around the world and a database of almost one-quarter-million patterns,” Cox said.