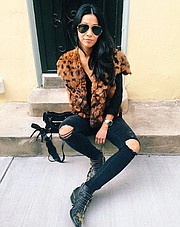 The 5-year-old Alliance Apparel has doubled its labels from three to six, its revenue has tripled, and the busting-at-the-seams venture moved on Feb. 1 and took over the entire second floor of the Gerry Building—an art-deco structure filled with showrooms in the heart of the Los Angeles Fashion District.

Visitors to the new cavernous offices are greeted with the sound of pounding hammers reverberating off the polished cement floors as workmen put the finishing touches on the new headquarters. The 11,000-square-foot second floor is one big room filled with rows of people in charge f marketing, design, putting together tech packages and tracking apparel production in overseas factories.

When Revolve made its acquisition in March 2015, Alliance Apparel—the maker at the time of the labels Lovers + Friends, Tularosa and NBD—had only 25 employees who worked in an Arts District office that was about one-third the size of its new office. Now there are 66 employees, and more people are being added all the time. 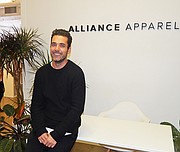 That’s why Alliance Apparel cofounders Mitch Moseley and Raissa Gerona looked for bigger space, picking the Gerry Building as their new corporate headquarters because the airy structure was near Alliance Apparel’s showrooms at The New Mart and the Cooper Design Space.

“This building correlated well with our focus of growing the wholesale side and being close to our showrooms,” said Moseley, the company’s chief executive. “They had the square footage we needed, and we have flexibility to grow.”

Already, Apparel Alliance is taking another 4,000 square feet on the building’s third floor.

In the next seven months, Alliance Apparel will introduce five new labels—an independent denim brand as well as two celebrity collaborations and two new independent lifestyle collections. The denim brand, Grlfrnd Denim, debuted April 13 on the Revolve site. The company also has a new department to create its own fabrics and have them manufactured for their collections. 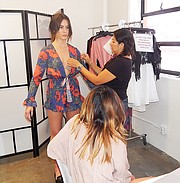 Moseley emphasizes that Alliance Apparel is a portfolio brand-development house, not a private label for Revolve, selling to retailers such as Nordstrom, ShopBop, Bloomingdale’s and American Rag as well as scores of boutiques.

Alliance Apparel is Revolve’s first acquisition since the online retail venture was founded in 2003 to serve the millennial customer with all sorts of clothing, shoes, handbags and accessories. The noncash transaction is more a partnership than an acquisition, Moseley said. Instead of cash, the two Alliance Apparel cofounders got a stake in Revolve and an infusion of cash to develop more brands.

“I have been friends with Michael Mente [cofounder with Mike Karanikolas] at Revolve because I sold my menswear brand to him years and years ago and became friends at that point,” Moseley said. “It was a natural partnership that came into place.”

Mente said Alliance was a good fit for Revolve.

“Alliance Apparel was an attractive acquisition due to Mitch and the Alliance team building an infrastructure that was able to scale quickly with great efficiency. We explored other acquisition opportunities, and nothing compared to the Alliance team,” Mente said. “Our plan for Alliance is to continue to organically build new brands. Alliance has a lot of exciting projects in the pipeline launching this year, which I’m super excited for.”

Moseley and Gerona launched the Lovers + Friends clothing line in 2011 after the two were introduced by Mente at Revolve.

The graphics team and designers at Alliance Apparel

Moseley got his start in the fashion industry while studying economics at the University of California, Irvine. During college, he got a job working in the marketing department of St. John Knits, now called St. John, headquartered in Irvine, Calif.

After graduating in 2005, he started with designer David Hershberger a menswear line called Endovanera, which was on the runway atGen Art in 2007 and had its own store in the Los Angeles suburb of Echo Park. Endovanera also was sold at Scout in Los Angeles, at Fred Segal Man and on the Revolve website. But when the recession hit in 2008, Moseley’s contractor went out of business and the label eventually did, too.

Gerona encountered the same problem. In 2008, she started a clothing line named after her grandmother Brigid Cattis, making one-of-a-kind pieces out of vintage fabrics. It too was sold at Revolve, but the label fell victim to the recession and ran out of money.

With similar experiences and an introduction by Mente, Moseley and Gerona started Lovers + Friends, which quickly blossomed into a successful womenswear label sold on Revolve and to about 350 to 400 stores around the country.

Shortly after Revolve’s acquisition, Alliance Apparel launched Raye—a shoe line; Privacy Please, a printed dress collection; and L’Academie, a collection of elegant blouses and dresses that was at first exclusive to Revolve but has branched out to sales at stores.

Moseley and Gerona, who is now chief brand officer at Alliance Apparel and vice president of brand marketing at Revolve, are thinking about adding a handbag line.

The two insist their company is run independent from Revolve, whose staff of about 600 people is based in Cerritos, Calif., some 20 miles away.

But Revolve can provide the infrastructure and backup needed for Alliance Apparel to expand. Revolve has more than 200,000 square feet of warehouse space that Alliance Apparel now uses for storage and shipping.

Gerona said Revolve’s involvement has provided Alliance Apparel with a good base of financial and infrastructure support. “They have been able to take our business to the next level from organizing shipping and logistics to being able to attract talented candidates to build our team,” she noted.

That backup has taken Alliance Apparel from earning $18 million in 2015 to taking in nearly $60 million in sales this year, and growth is expected to expand to more than $100 million in revenue next year.

“I hope to see all of our brands continuously grow year over year but always staying true to their core,” Gerona said. “We want to continue to expand our wholesale reach domestically and internationally and maybe even have stand-alone stores in the future.”