NEW YORK—Première Vision New York celebrated the 33rd edition of the biannual trade show during the July 19–20 run at Pier 94 in Manhattan, where more than 352 exhibitors showcased the latest textile, trim and original artwork collections.

The French trade show renewed its partnership with the Council of Fashion Designers of America, a part of the trade show’s effort to provide resources for up-and-coming designer brands.

“Our objective is to concentrate on emerging brands,” said Première Vision International Exhibitions Director Guglielmo Olearo. “From services to our new manufacturing and leather seminars to consultations with [our Deputy Fashion Director] Sabine Le Chatelier, we are trying to serve them.” 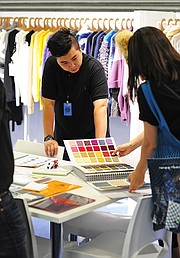 Emerging designer Wataru Tominaga, who won the 2016 Grand Jury Prize at Première Vision in Paris earlier this year, was at the New York show with an exhibition of his work.

“We select our exhibitors because they match our criterion of creativity, sustainability and economic reality,” Olearo said.

“We’re here to expand our customer base,” said Creative Director Gianmarco Schiatti, who has been attending Première Vision shows all over the world for the last 28 years.

“We’re trying to enlarge our customer base and [get in front of] mid-size companies. When you make personalized visits, it widens your base in America.”

Another brand looking to widen its U.S. client base is Winchester, England–based design collective Peagreen.

The 13-year old company, best known for its original artwork featuring novelty characters and conversational patterns, has eight full-time employees and has exhibited at Première Vision New York for the last eight years.

“We don’t have a sales team,” said George Sharp, part of a team of Peagreen designers who also work the company’s booth at trade shows.

“It allows us to know what we’re talking about because a lot of us have [created] the designs,” he said. “We were among the first to take up an online portfolio. Everything at our booth is online, so people who meet us at shows can look at our collection at home. [We’re] making it easier for our customer.”

“With your device, you can be in several places at the same time,” Le Chatelier said.

“The trends are coming from sociological [influences] and the evolution of how you socialize. The same person can have moments of ‘de-connection,’ moments of calm and moments where [they] want to connect.”

Le Chatelier said that this is reflected in fashion, as many of the garments echo “a bubble of comfort,” with cozy, soft and sensual layers.

“We’re not only trend forecasting—we always rely on reality,” she said.