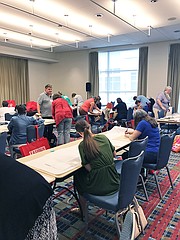 Joe Vecchiarelli teaching patternmaking and draping at the Original Sewing and Quilt Expo in Raleigh, N.C.

For 85 years, four generations of the Vecchiarelli family have been selling apparel supplies to manufacturers in Los Angeles. But in December, owner Joe Vecchiarelli is closing the family’s retail operations.

“It’s time to consolidate Fashion Supplies into something more manageable and enjoy a semi-retirement and focus on the family,” Vecchiarelli said.

Vecchiarelli has been working in the business his father founded since he was in his teens, but the family business dates back to 1936, when three Italian immigrants—Cosmo, Nick and Lee Vecchiarelli—relocated their scissor-sharpening business, Newark Cutlery, from Brooklyn, N.Y., to downtown Los Angeles. Cosmo’s son Mario joined the business and eventually Mario’s sons Joe and Jim Vecchiarelli joined the company and expanded it to Vecchiarelli Brothers, which sold sewing supplies and notions to the industry.

Joe Vecchiarelli remembers accompanying his father to the set of “Star Trek” in the 1960s, where the costume designer told him that they were looking for a full-body male dress form. Even though Vecchiarelli Bros. was not in the dress-form business, the teenage Vecchiarelli—who wanted the chance to return to the “Star Trek” set— promised he could get one.

Joe Vecchiarelli and his wife, Kelly

“That was my start,” Vecchiarelli said.

“That dress form has been the standard in the industry, home sewing, department stores and television,” he said.

In recent years, Vecchiarelli has been hosting workshops at home-sewing trade shows around the country.

“I took what I learned in the industry in how to fit people,” he said. “I learned to do patterns, draping, grading—all aspects of the fashion industry. I was the fit specialist.” 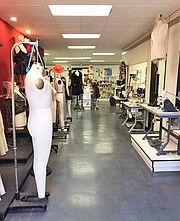 The home-sewing market is large and underrepresented, Vecchiarelli said.

“They want hands-on workshops, and they want to hear the industry perspective,” he said.

But running the Fashion Supplies retail business, maintaining custom accounts in the television industry and attending up to 14 home-sewing trade shows annually has been challenging.

“It’s time to move on to focus on the trade shows and maybe maintain a few custom accounts,” Vecchiarelli said. “It’s bittersweet. I’ve worked with every major manufacturer and I’ve seen the industry change over the years.”