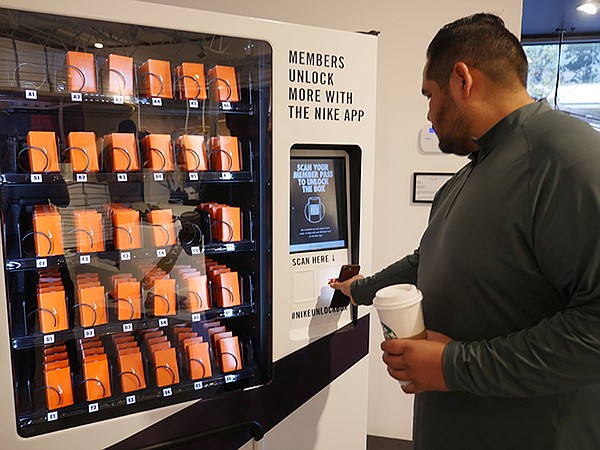 Consumers can get free socks from an app-enabled vending machine at the Nike by Melrose store in West Hollywood, Calif.

It’s been a time of shake-ups for the apparel business.

Retail stores are rejiggering the way they sell to customers, shrinking their stores and concentrating more on online sales. This means that manufacturers and those on the wholesale side of the apparel business are also having to reconfigure the way they do business.

There is no question that the traditional wholesale-and-retail business formula is in flux. However, there are different forecasts on which way the fashion industry is headed.

Without question, the cause for this turbulence has been the popularity of e-commerce sites and digital business, said Caroline Klatt, chief executive officer and co-founder of Headliner Labs. The New York–based company produces “chatbots,” which deliver marketing messages and communicate with people on chat channels for social-media services such as Facebook Messenger and Whatsapp.

“Retail is changing,” Klatt said. “E-commerce continues to grow by double digits. Direct-to-consumer opened up what is a sizable opportunity for brands to forge a relationship directly with their customers and reap the benefit in margins.”

The importance of e-commerce for most major retailers continues to grow, with online sales making up between 25 percent and 40 percent of their annual revenues, and this is only expected to continue growing.

More than 10 years ago, brands had to work in the wholesale channel or open up a physical store to reach consumers, Klatt said. “But digital has created a whole different approach. Brands that sell direct to consumer are investing heavily in their brand identity and in digital traffic to their own branded websites, which means consumers are shopping for these items in isolation; they no longer have to see a bunch of different brands grouped together at a department store or large multi-brand retailer,” she explained.

But the direct-to-consumer business has not proved to be easy because an e-commerce business has to be a jack-of-all-trades to succeed. Manufacturers have to learn how to be retailers and take on fulfillment duties.

Still, consumers have not completely abandoned bricks-and-mortar stores. The vanguard of online-only retailers, including Everlane, Warby Parker, Bonobos and Amazon, have been opening up physical stores in recent years.

With people shopping more online, the stores have scaled back their spaces. They are expected to be more experiential and be places where people immerse themselves in a brand experience.

“The nature of a fashion company has changed too,” Meagher said. “Fashion is becoming more like a media company.”

But if work is harder for manufacturers, Meagher said, it’s a better market for consumers because there is more diverse product to choose from.

There’s a giant drive for fashion companies to “publish new content.” It’s the reason for the boom in collaboration lines and capsule collections, she said. “It’s chaotic for brands. It’s chaotic to manage open-to-buy. You must design more frequently. There is more pressure on the supply chain,” she said.

Direct-to-consumer has created more business opportunities for Los Angeles–based manufacturing consultant Daniel Antonio. He continues to design for his brand, Dirty Milk. But now 70 percent of his income comes from working as a production consultant for small brands and social-media influencers.

Emerging brands typically need small orders, which range from a handful of garments to 100 units.

Antonio said that, more than a decade ago, many factories were not interested in small orders. In the past few years, there’s been a boom in small-order production because that is where the opportunity lies. A key part of this manufacturing scene is providing something that overseas manufacturers cannot.

“It’s about how fast can you produce it,” Antonio said. “We have to work faster than China.”

Despite the popularity of shopping online, there’s still a lot of money to be made in traditional bricks-and-mortar retail, said Ilse Metchek, president of the California Fashion Association, a nonprofit fashion-industry group in Los Angeles. She forecast that the majority of consumers will continue to shop at traditional retailers.

However, the traditional department-store sales floor will change. “In multi-floor department stores, there will be more leased departments. The brands will be responsible for their own inventory. It is the European model,” she said.

When shoppers visit a European department store such as Galeries Lafayette, they see brands producing special shops-in-shops. American department stores such as Bloomingdale’s have been ahead of the curve in the United States by having branded environments for fashion labels on their shop floors.

Like every other big shake-up in business, changes in the wholesale business are affecting workers who relied on traditional retail, such as store salespeople and wholesale-showroom employees.

However, the showroom business must change to stay alive, said Ernesto Mantilla, co-owner of the Betty Bottom multi-brand showroom, located in the California Market Center in downtown Los Angeles. “Over and over, I hear people talking about the good old days. I tell them that the good old days are now. You have to adapt.”

Showrooms can help boutiques that do not have a strong Internet presence, he said. At Betty Bottom, they work with boutiques to provide speed-to-market.

If a consumer requests a specific garment a boutique doesn’t carry, the boutiques can call the showroom to find that item.

If the showroom doesn’t have it, an employee can call the manufacturer and special order the item, which oftentimes can be delivered in a week to satisfy the customer, Mantilla said.

For manufacturers, the changing retail business climate has put the traditionally solid bonds between manufacturers and retailers in question.

This means that manufacturers such as Nike Inc. have had to retool their relationships with their retailers. Nike has been working on plans to cut ties with thousands of its wholesale partners, as outlined in a plan introduced in mid-2017 called “Consumer Direct Offense.” It reportedly will focus its wholesale business on its top-40 accounts, which have not been named yet, according to media reports.

Nike is also concentrating on its direct-to-consumer business, which was praised when the company’s second-quarter earnings results were released on Dec. 10, which showed revenues were up 10 percent to $9.4 billion.

This shift in the wholesale business has also affected trade shows catering to retail buyers.

After a 36-year run, trade-show producer Emerald Exhibitions canceled its Interbike trade show in Reno, Nev. And Agenda, one of the West Coast’s prominent trade shows, cut out the business-to-business focus from its Long Beach, Calif., event to transform it into a business-to-consumer show.