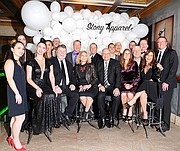 They also bid in a silent auction for vacation getaways and luxe items to raise funds for the Duarte, Calif.–headquartered research hospital, which treats cancer, diabetes and other serious illnesses.

Gifts being auctioned off ranged from signed jerseys from Golden State Warriors basketball player Kevin Durant to a vacation in a villa in Southern Italy. The minimum bid for the Mediterranean stay was $15,000.

Over the years, the City of Hope’s Fashion & Retail Group has raised $44 million for the hospital and research center. At this event, it raised $300,000.

The “Welcome Sponsor” to this year’s event was juniorswear maker Stony Apparel, said Rosenthal & Rosenthal’s Sydnee Breuer, who is the executive council president for the Fashion & Retail Group.

“We’re friendly competitors,” she said of the evening’s sponsors. “It’s nice to come together for this celebration and raise money for this great charity.” Unlike past years, the 2018 event had no individual honoree. But a search is on for an honoree for the 2019 event, Breuer said.

Breuer talked about the City of Hope’s mission and introduced Emily Bennett Taylor. The woman, from Long Beach, Calif., was diagnosed with Stage IV lung cancer when in 2012 she came under the care of the City of Hope’s Dr. Karen Reckamp. The forecast for her survival was poor. But after chemotherapy and surgery, she lived to become the mother of twins.

City of Hope’s Fashion & Retail Group often puts on gala events for the hospital. Each year, the Spirit of Life is held at different venues. In the past, events have been held at Soho House in West Hollywood, Calif., and the City National Grove of Anaheim, adjacent to Angel Stadium. In 2012, the philanthropic group held a Studio 54 party where pop star Miley Cyrus performed and Britney Spears attended.