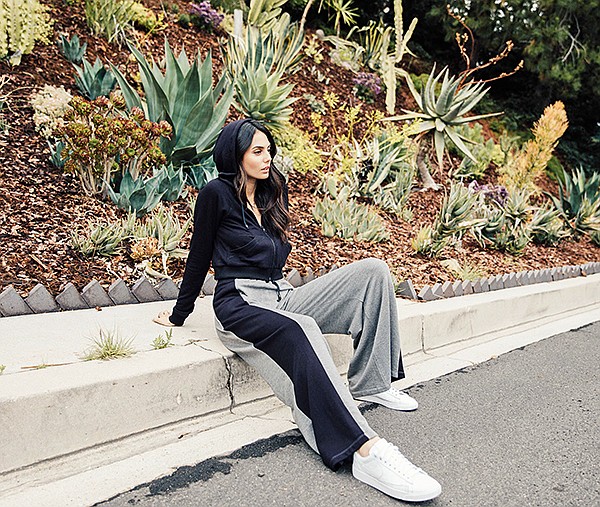 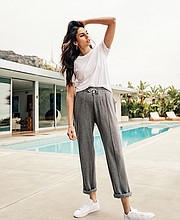 When men’s high-end basics line Mitchell Evan planned to release a women’s collection, the Los Angeles–headquartered brand’s executives did not want to take a one-silhouette-fits-all approach, said creative director Jarret Levin. After recently opening to wholesale, the new women’s line is scheduled to be delivered to specialty stores and be available on mitchellevan.com in February 2020.

“We often get women who want to wear the men’s line, but we wanted to give them items that would fit them properly,” Levin said. “Women have more shape. So, a lot of what we did was play with proportion. One of our looks is the Jet Wide Leg sweatpant. The wide leg gives the illusion of a smaller waist.”

The foundation of the basics line was the masculine silhouette for men’s styles, which includes T-shirts, sweatshirts and hoodies. Silhouettes for men were typically slim, while unique dyes and washes have been a signature of the brand. It also makes bomber jackets, overcoats and swim trunks. 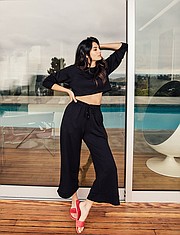 It’s a new direction, said Mitchell Evan’s founder and president, Mitchell Sandler. He said that the brand had always intended to make clothes for women, but he wanted the brand to have a strong experience producing its inaugural focus—men’s clothing—before it produced another category.

Theresa Metzler, the brand’s development and production consultant, had worked with Mitchell Evan since 2014, before its first deliveries were made in 2017. The brand has been placed in boutique retailers such as Ron Herman, American Rag Cie and Planet Blue. Metzler worked closely with Sandler and Levin on the new women’s styles. “You don’t have to have a tighter fit,” she said of women’s basics. “You can make them adjustable. You can wear it loose or tight.”

Women’s looks include five different bottoms. In addition to the Jet Wide Leg sweatpants, looks include sweatpants with some of the designs created with slits around the calf. Other wide-leg pants have a wide stripe panel that appears along the length of the leg, while another pant silhouette features a three-quarter-length bottom with a hem that falls above the ankle. 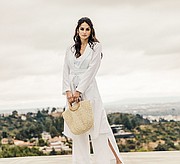 The line also includes dresses with spaghetti straps and tops that are tightly cropped just below the navel. For the first womenswear delivery, colorways were kept basic. Most of the styles are in black, gray, white or navy.

When Sandler started working on Mitchell Evan, he thought that the line would fill an opening in the high-end basics market that he called “Soft Sunday.” These clothes would feel like loungewear, and they would be made out of soft fabrics such as cotton, rayon, linen and hemp. However, the Soft Sunday clothes would have a high-end appearance, where they would be appropriate at a café or brunch.

The clothes are cut, sewn and dyed in Los Angeles with retail price points ranging from $70 to $225.