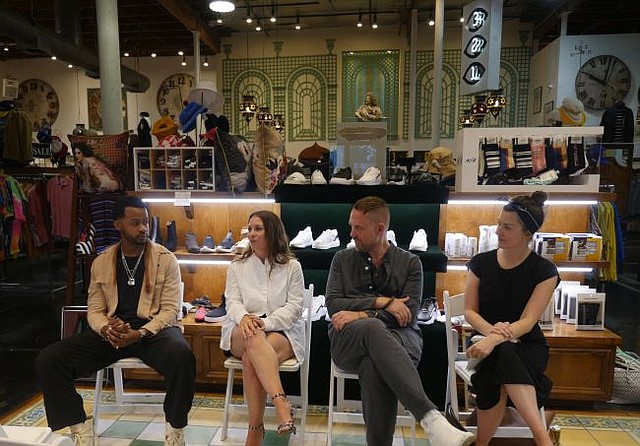 Originally known for socks, underwear and tees, expect to see French terry sweats among Richer Poorer’s 2020 looks. Some new styles from the collection, such as bralette styles, were previewed in the brand's Fall ’ 19 collection.

Just before the big launch, which will include a new brand logo, Richer Poorer produced a styling panel, called How To Get Dressed. It took place Aug. 8 at pioneering specialty shop American Rag in Los Angeles.

The panel briefly touched on androgyny in fashion (expect more of it,) and costing (do your research before making a purchase ) and merchandising a store. (Sawyer: “People are more about getting a bang for their buck. People want something that is going to last.)

They also talked about what fashion they like. For Alaimo and Sawyer, wide-legged pants were a fave. Alaimo talked about wide legged, wool pants that she got at a Helmut Lang sample sale. She called them “A good pair of boss pants for women!” McBride marked his fashion favorite as a parka. “I look relevant when I wear it. Even if underneath, I may be wearing what I slept in last night,” he said.