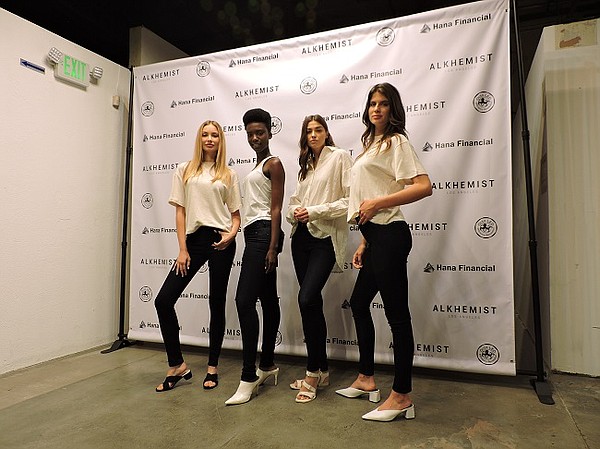 “In Chinese medicine, we’ve been using hemp since 2,737 B.C.,” Chung explained. “If you look at our logo, it says, ‘Established 2,737 B.C.’ That is nearly 5,000 years that Chinese medicine has been using it. Seven years ago, I started to examine it and learned that hemp had a bad rap all this time. The plant isn’t used only to get high.”

Cultivating industrial hemp crops to create fabrics is one of the most traditional—and sustainable—resources for clothing manufacturing. Colonial-era farmers in the United States raised the crop, as did such notable figures as George Washington, Thomas Jefferson and Betsy Ross.

“Hemp was 30 percent of American agriculture before cultivation became illegal in 1937,” Yun said. “We looked at hemp to create a lot of different materials as regulations have been evolving over time. The [Agricultural Act of 2014] allowed it to be used for research purposes. With the Farm Bill of 2018, the floodgates opened for the federal opportunity.”

From friendship to farm

As students at Harvard University followed by the University of Chicago Law School, Chung and Yun first became friends in 1989. With Chung as Alkhemist chairman, chief executive and founder, and Yun as the vice chairman and co-founder, the duo launched the company in Los Angeles in 2017 following the recreational legalization of marijuana in California in 2016.

“The long-term goal is to be fully sustainable. The hemp stalk has cellulose, which you can turn into plastic and apparel,” Yun said. “The agriculture industry is really suffering right now due to trade wars. China isn’t buying our products, and there is flooding in the Midwest. We want to revitalize American agriculture through the use of hemp.”

The finished space resembles a medical laboratory rather than a sketchy grow house, and the business partners are intent on shifting the perception of hemp cultivation away from the bad reputation it has had for the last 80 years.

“The beauty of the material is that it’s extremely sustainable. It’s light and has a low-carbon footprint, in addition to using 85 percent less water than cotton,” Yun said. “This is an opportunity for us to showcase this for the entire country. People have been conflating hemp and [marijuana] for so long, and they don’t know the difference.”

Despite their cultivation from the same plant, there exists a considerable difference between hemp and marijuana, mainly their abilities—or lack thereof—to create a psychoactive effect. The strain of cannabis that yields a higher measurement of tetrahydrocannabinol, commonly known as THC, can produce a high. Industrial-hemp strains produce lower amounts of THC, the current legal measurement of which is .3 percent or lower by law in the United States.

Currently, Alkhemist sources its hemp from China, and it is then spun into a blended yarn in Georgia. The company’s fabrics and apparel are manufactured in Los Angeles. After the opening of the Los Angeles cultivation center and with more than 300 acres of land in Palmdale, Calif., Chung and Yun are looking to scale their business into a completely U.S.-based operation while they examine ways to incorporate more hemp into their goods.

“We’re not saying we’re 100 percent hemp—we’re hemp incorporated,” Chung said. “There are styles in which the fabric might not have hemp, but what about the stitching, labels, or accessories? Sometimes an undertaking seems too monumental, but I like to focus on baby steps toward sustainability.”

With Father’s Daughter co-founder Su Kim as their senior designer, Chung and Yun have created a vertical model for cultivating cannabis products, from its luxury denim and apparel to CBD-infused lifestyle products. Alkhemist launched its apparel line with women’s denim, T-shirts and hemp-linen button-up shirting.

“The shirting reminds me of the original idea of hemp clothing—very blousy,” Kim said. “We’ll expand that fabrication into drawstring shorts, a shorter sleeved top and a dress.”

This expansion will take place next month, in addition to more growth in the works for Alkhemist’s apparel offerings. This August, the company plans to enter into a basics category that Kim refers to as “hemp leisure.”

“We’re trying to expand into men’s with a basic athleisure collection,” Kim said. “For now, it would be the basic Los Angeles uniform—unisex T-shirts, crew necks and V-necks. We’ll adjust it to be a converted style, the same pattern but cropped so it will be a fluid production.”

Available through its e-commerce site, Alkhemistla.com, Alkhemist is remaining selective when considering wholesale partners. Women’s denim is retail priced from $160 to $194 and sized 24­­–32 or 34, depending on the style. Shirts are available in sizes XS–L, with T-shirts retailing for $68 to $79 and the button-up style available for $172.

The Alkhemist team is not only intent on growing the American agricultural hemp business but also the local Los Angeles apparel industry. By maintaining an executive space in Koreatown and launching its cannabis-cultivation center in Boyle Heights, the company wants to create jobs for the local community to thrive.

“We’re trying to keep as much as possible in Los Angeles to help revitalize the garment industry,” Yun said. “One of our core values is sustainability, and there are two aspects: environmental and human sustainability—making communities self-sustainable and self-sufficient.”