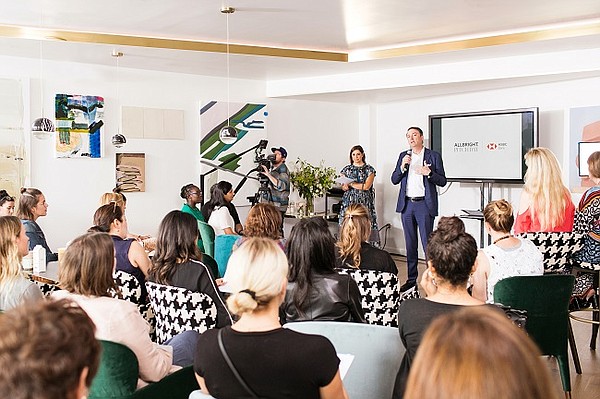 As professional women's leadership club, AllBright, prepares to open its West Hollywood, Calif., location on Melrose, it joined forces with HSBC Bank to host a Pitch Day to provide opportunities for female entrepreneurs to connect and collaborate. Founded in 2017 by Debbie Wosskow and Anna Jones, AllBright launched with a London club in 2018. While a West Hollywood, Calif., location will officially launch in September, HSBC and AllBright entered into a partnership that brought together professional woman for the first in a series of Pitch Days on July 23.

“We have a single mission in mind—to create opportunities for all women everywhere to help them to thrive," Wosskow said. "In the U.S., only 2.2 percent of venture capital goes to female-led businesses despite their year-over-year increases over the last decade. Women-owned businesses account for only one-third of all privately owned businesses."

In addition to these statistics Wosskow revealed that women-owned startups deliver a better ROI.

Through its partnership with AllBright, HSBC is determined to help elevate the role of female entrepreneurship.

"These stats are quite dismal when it comes to women founders and leaders of new businesses," said Mark Pittsey, the West Coast market head of HSBC Global Private Banking. "[This is] a natural partnership in that HSBC has deep experiences with founders, family offices, family businesses, small business and large businesses. We can help connect to these women-owned businesses that are pitching here and go foread to bring a diversity of thought and conversation."

For Pitch Day, a large group of female entrepreneurs gathered in the new AllBright space to get down to business. A panel comprising female executives sat to the side of the audience while six women made three-minute business pitches. One of those founders was Madeline Fraser, founder of Gemist. As a woman who has founded three companies, appeared on the entrepreneurial-spirited show "Shark Tank" and raised more than $18 million in venture funding for her last business, Hutch App, Fraser is familiar with navigating the path as a female entrepreneur.

"We need to see a lot more women as founders," she said. "I spend a lot of my time helping founders who are just starting out. We need to help each other."

With her latest venture, Fraser recently completed a second round of beta testing for her company, which allows women to sample customized ring designs through modular designs. These pieces offer settings that can be swapped with other styles to ensure the perfect ring. Once customers are ready to create a ring using authentic gemstones, Gemist facilitates this task as well.

"This is something that has never been done before," Fraser said. "We are trying to innovate an industry that has been in stuck in the past."

All stones are sourced sustainably within the United States and Fraser works with vendors in downtown Los Angeles. With stand in rings available at a retail cost of $200 or less, some women are using the faux pieces during travel and men are proposing with them prior to investing in genuine designs—whose settings retail for $300, plus the cost of stones—to reduce the risk of losing the piece in a remote engagement locale.

"We are trying to innovate for a younger demographic that expects instant gratification and customization first," Fraser explained. "I am also trying to make jewelry in general accessible to the masses."