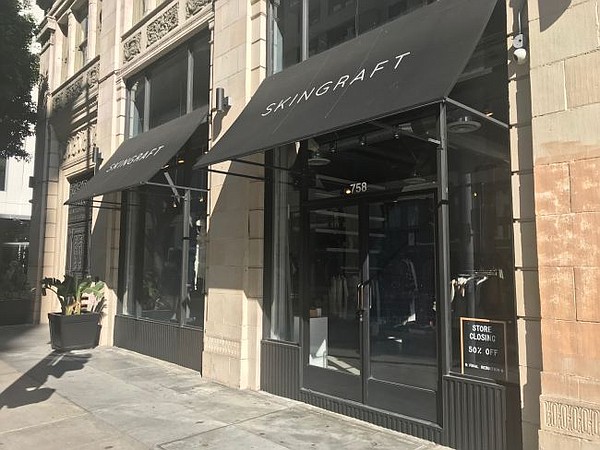 March 29 will be the last day of business for the flagship store for Skingraft, which was one of downtown Los Angeles' retail pioneers.

The label, founded by designer Jonny Cota and his brother Chris Cota, will continue to make its high-end leather jackets, and fashions and accessories for men and women. They are scheduled to open a multi-brand store in downtown Los Angeles’ Arts District this summer. The upcoming store will offer Skingraft clothing, along with art, homewares and styles from other clothing brands. However, the new store will not bear the name Skingraft, Jonny Cota said.

A couple of years later, Skingraft’s new block became something of a construction site. High-rise, luxury apartment buildings The Grace on Spring and The Griffin on Spring and were respectively built adjacent and across the street from the flagship. ”We had no sidewalk and no parking for three years,” Jonny Cota said.

High-end stores, such as a highly anticipated Apple emporium, are currently scheduled to open a block away later this year. The Cotas thought that the new denizens of their neighborhood weren’t the perfect demographic for a brand with roots in nightclubbing and avant-garde art.

“We love downtown and we’ll miss it. We recognize that we were part of this rebirth of downtown,” Chris Cota said. “It’s a changing environment that no longer supports what we do.”

The brand’s lease expired recently. The street’s rents were increasing and the Cotas thought it was the right time to leave. Chris Cota declined to state how much his brand paid for rent.

On Saturday, London-headquartered brand KTZ will start a 10-day pop-up shop at 758 S. Spring St. Then the Cotas will start building their yet as unnamed store. “We think our world is bigger than Skingraft. We want to create a concept that brings that vision to our clientele,” Chris Cota said.