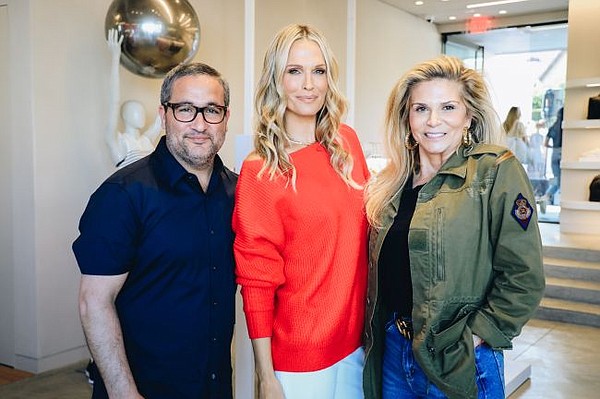 Bandier's Neil Boyarsky and Jennifer Bandier at May 16 opening of their Melrose Avenue flagship. Actress Molly Sims hosted the opening party. She is pictured center. Photos by Kathryn Page

A florist’s loss is the gain for activewear fans.

Multibrand-activewear shop Bandier recently moved into 8101 Melrose Ave., which was the former address for Moe’s Flowers. Best known for its orchids, Moe’s was located across the street from the former Fred Segal Melrose compound on Melrose Avenue and North Crescent Heights Boulevard. Pioneering boutique retailers Ron Robinson and Ron Herman continue to do business at the former Fred Segal compound, and it remains a major hub of boutique retail in Los Angeles.

Bandier co-founders Neil Boyarsky and Jennifer Bandier opened their new West Coast flagship May 16 at the former address for Moe’s, and on this major intersection for retail. And their space is big. The Bandier shop is 8,800 square feet and three stories. With all that real estate, Bandier packs in a lot of features.

And, of course, there’s a lot of activewear and footwear from a lot of different brands such as Koral, Electric & Rose, Cotton Citizen, Adidas, Beach Riot, Spiritual Gangster, Bandier and more.