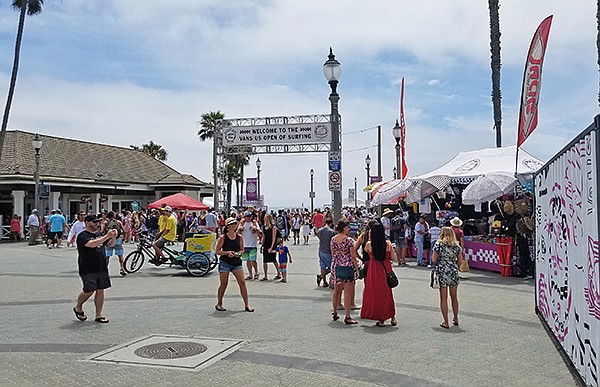 “The last, true, privately held surf companies have all been basically sold off in one shape or form,” said Greg Weisman, a lifelong surfer and an attorney with the firm Ritholz Levy Fields LLP, who has advised surf and action-sports companies throughout his career.

This string of deals follows one of the biggest mergers in surfwear history. In April 2018, Boardriders Inc., the parent company of the pioneering brand Quiksilver, acquired its chief rival, Billabong International Limited. A Reuters article said that Boardriders used $600 million in loans to acquire its rival and its family of brands to create a super company of the most popular brands in surf, including Quiksilver, Roxy, Billabong and RVCA. These brands manage 7,000 wholesale customers around the world, according to a company statement.

The deals and consolidation of brands have marked the end of an era for a number of companies that were mostly based in Orange County, Calif., and had influenced youth styles for generations of Americans over the last 40 years, Weisman said.

“Surf, skate and action-sports companies were founded in the ’80s and ’90s by entrepreneurs who themselves were surfers, skateboarders and aficionados of the sports. These were pioneers who rejected a larger corporate culture and wanted something they could call their own that reflected the unique lifestyle they lived in Southern California or coastal Australia,” Weisman said. “Volcom’s primary tagline was, ‘Youth Against Establishment.’ It pretty much says it all right there. Now, all of these legacy brands are reduced to balance-sheet assets of the very corporate umbrella they were formed to eschew.”

While surf brands and surfwear started popping up in American retail in the 1950s and 1960s, the surfwear business enjoyed its biggest ride in the 1970s and 1980s. Entrepreneurs such as Bob McKnight and Bob Hurley took the garage businesses of Quiksilver and the U.S. license for Billabong, respectively, and built empires with them.

But all of these companies seemed to wipe out during the Great Recession. Bricks-and-mortar retail locations closed as digital commerce caught the next wave. One of surf’s most important retail accounts, Pacific Sunwear of California, went through a bankruptcy in 2016 and pivoted to focus on private-label clothing lines as well as brands with a streetwear look.

Youth fashion styles also changed, with surf no longer capturing as much of the imagination of young people as it had in the past. In 2018, streetwear pioneer Bobby Kim of The Hundreds brand gave a speech at a Surf Industry Manufacturers Association meeting where he critiqued surf brands for not connecting with a huge part of the fashion market because their marketing and advertising campaigns were not diverse enough.

Also, founders of the companies that had guided surf to stratospheric heights began to retire. After 2010, Bob Mc- Knight, Bob Hurley and Richard Woolcott of Volcom all left the companies they had led. The executives who replaced them weren’t as connected to the surf world and its roots, Weisman said.

“If you are only interested in ROI and you don’t surf, then you don’t care,” he said. “And that will be reflected in the products and marketing that follow.”

After the founding group of executives left, many of these brands stopped producing competition events, Weisman added. And independent styles also suffered.

“I don’t see any one of those brands investing in new technical products and the marketing initiatives these brands did when they considered their authenticity to the sport to be a driver of sales,” he said.

…Or a legacy recaptured?

There are a handful of small, independent surf brands such as Vissla and Roark making waves. Changes in the surf world come as part of an industry-wide consolidation, said Patrik Schmidle, president of the market-research firm ActionWatch.

“It’s a continuation of a consolidation trend,” Schmidle said. “It’s normal when you have a market that is not growing or growing slowly. If the market is not growing, you have to figure out other ways to increase distribution to grow sales.”

Growth is not always smooth. Placing brands in mainstream retailers can offend fans that supported a brand when it was exclusively sold at core surf shops, he said.

Yet Schmidle sees many surf brands exercising independence after they’ve been bought.

“What’s striking is that long after having been acquired, many brands are still operating as independent brands with their own executive teams. In other industries, you don’t see that as much,” he said. “To be independent and have authenticity is part of the culture of the industry.”

The Orange County, Calif.–headquartered Vissla and Roark have each started opening bricks-and-mortar stores. Vissla is scheduled to open its second physical store at the 2nd & PCH retail center in Long Beach, Calif., later in November. Roark opened a shop the first week of November at the One Paseo retail center in Del Mar, Calif. It also opened a flagship store on Los Angeles’ La Brea Avenue in September and another store in Berkeley, Calif., last year.

There’s been an uptick in sales for independent specialty shops that ActionWatch covers. From January to September this year, core shop sales increased 3 percent compared to the same period in 2018. The uptick represented a seven-year high, Schmidle said. He roughly estimated that independent core surf and skate shops make up between $500 million and $1 billion in U.S. sales.

And the star of the action-sports sector, Vans, continues to experience major growth. The Costa Mesa, Calif., skate-focused brand enjoys high popularity in the surf world. Its growth has skyrocketed in the past decade. In 2016, revenue reached $2.2 billion. According to financial documents, the company forecasts that it could reach revenues of $5 billion by 2023.