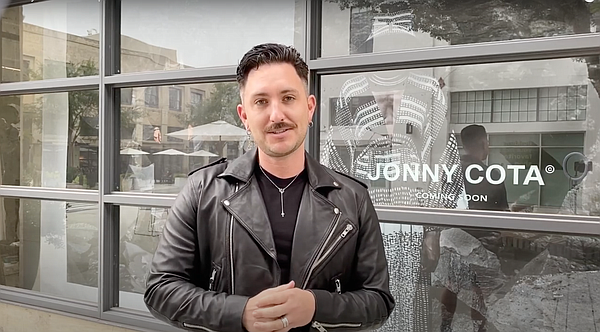 A few months after his victory on “Making the Cut,” a fashion-competition show produced by Amazon Prime, Los Angeles designer Jonny Cota opened a new, self-named store on Aug. 1 at the Row DTLA campus of retail, dining and creative offices in downtown Los Angeles.

Located on the site of his former multi-brand store, Cota by Skingraft, the Jonny Cota shop takes the place of the store that shuttered in March due to government orders to close nonessential retail and public places during the first weeks of the COVID-19 pandemic. Select stores at Row DTLA have been reopening since July 20.

Cota and his business partner, brother Chris Cota, wanted to use the store reopening as a vehicle to launch a new chapter of Jonny Cota’s career. The rebrand will retire the nameplate Skingraft, which was the moniker of his downtown Los Angeles leather outerwear and accessories brand. It will put all of his fashion ventures under the nameplate of Jonny Cota.

The Jonny Cota store was originally planned to open in May, shortly after “Making the Cut” hosts Tim Gunn and Heidi Klum announced that Cota had won the show’s $1 million prize after competing against 12 other designers.

“It is a peculiar time,” Cota said of the pandemic. “Pushing anyone to buy anything is tone deaf. But 2020 is our year. We moved slowly and diligently to make this feel not out of step. The precautions are right to share with people in a new and engaging way.”

The 2,000-square-foot store features tools to help customers and staff maintain physical space, such as contactless payment. Cash will not be honored at the store. But like a traditional boutique experience, the store also features Jonny Cota’s fashions, accessories, signature perfumes and homewares for purchase. Most crucially for Cota, the shop will also serve as a gateway to a virtual experience, he said.

“I never imagined launching my namesake from home in sweatpants,” he said. “The pandemic has pushed us to prioritize digital, prioritize online, prioritize a customer experience that doesn’t require them coming to the store. Even as we built the physical store, digital is a priority. It’s almost been a blessing. It’s guided us to the future of retail.”

The virtual store, jonnycota.com, was also introduced on Aug. 1. It features videos of installations from artists Adrian Gilliland and David Meanix. These installations are also featured at the physical store. In addition, the website offers videos showing behind-the-scenes, documentary-style video footage from the production of Cota’s editorial campaign for the Metamorphosis collection of Jonny Cota Studio, the line that won “Making the Cut.”

Physical retail remains an integral part of the Jonny Cota brand experience. The store will be the exclusive retailer carrying the Metamorphosis collection, which has previously only been available on Amazon.

During his time working within The Cota by Skingraft store, Cota sought to establish a space for experiential retail, a mission on which he is still focused through his fresh venture. “You can come in and there’s no pressure to shop. Come and experience it,” Cota said. “But if you want to shop, you can either make a purchase with our team or make a purchase by scanning barcodes with your phone.”