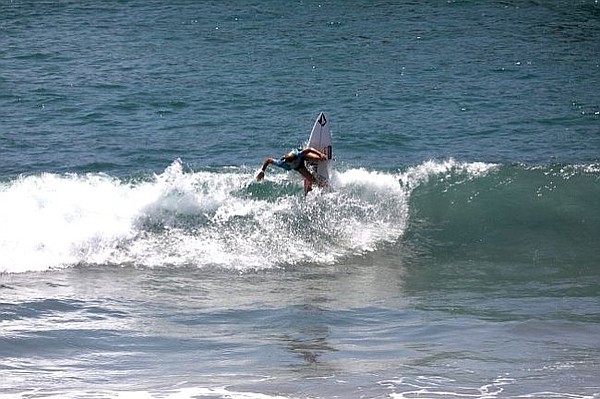 Courtney Conlogue competes at the Vans US Open of Surfing in 2018. Photo: Julian Martin

Board-sports retailers have said that sales of hard goods have been skyrocketing since stand-alone shops were able to reopen in June. Stores located in indoor malls in many California counties were ordered to stay closed in a mandate by the state government on July 13.

Bob Abdel, co-owner and buyer for the influential Jack’s Surfboards in Huntington Beach, Calif., said business is good. The only problem is inventory.

“Surfboards, skateboards and wet suits are selling like hot cakes. You can’t find them. You have to wait five weeks for orders to come through,” Abdel said. “A lot of companies did not anticipate it. So it’s been very hard to find merchandise.”

A recently released report from the market-research company ActionWatch, which is owned by Sports Marketing Surveys, based in Jupiter, Fla., found that June sales were great for its panel of independent surf-and-skate retailers. Year-over-year sales for these stores in June increased by 15 percent. Many of these retailers run businesses on retail streets and beachfront neighborhoods away from indoor malls.

“This resulted in an almost perfect V-shaped recovery after a disastrous March and even worse April and a promising May,” wrote Patrik Schmidle, president of ActionWatch. Its June sales report was released on Aug. 4.

Preliminary ActionWatch data for July sales for its panel of retailers indicated that sales would not be as encouraging as June’s. But he forecasted that this new wave of hard-good sales growth might continue.

“I don’t see the trend toward individual sports going away anytime soon,” Schmidle said. “Sell-through rates for equipment related to those activities is big.”

Sales for soft goods such as T-shirts and board shorts also rallied in June. But soft goods did not make the same robust rally as hard goods such as surfboards and skateboards. Apparel sales in June increased 1 percent in a year-over-year comparison.

Soft-goods sales also have been gummed up due to supply-chain issues. Many surfwear companies ceased production during the shutdown of nonessential businesses. There also have been problems with staffing factories overseas and with domestic warehouses because some workers wanted to avoid possible exposure to COVID-19. Schmidle said that there’s not enough inventory in stores to meet demand.

“It’s been reflected in every part of the supply chain in some shape,” he said of demand for goods going from high in January and February to very low in April, then growing higher in May and June. The pace of demand has put some companies in turmoil.

“They’ve been going from driving full speed to driving in reverse to shifting back into fifth gear,” Schmidle said.

Even with a June rally, soft goods have some more challenges to overcome before a full recovery can be claimed. “For numbers to come back, we have to get back to 100 percent of people being comfortable with shopping again,” Schmidle said. Due to COVID-19 fears, some have not returned to shopping at physical stores.

At the same time, the COVID-19 crisis has also contributed to the success of the independent stores that were open. For many consumers looking for new goods, they were the only places to shop.

“It benefited these core shops. The stimulus checks also helped them,” Schmidle said. He also noted that the core stores survive because they are considered community landmarks. “There’s a core audience for these shops as they tend to be well entrenched in their community,” Schmidle said. “Skate-and-surf shops are beneficiaries of that.”

The June rally has been spread unevenly. High-profile specialty retailers such as Tilly’s Inc. are having a tough year because many of their bricks-and-mortar stores closed under COVID-19 restrictions. In a July 15 statement, Tilly’s said that it had to close 28 of its indoor-mall store locations in California a couple of days after the state government ordered these shopping centers closed for the second time in 2020 to stop the spread of COVID-19.

“The whole world was at a standstill for three months, but Internet sales have been off the charts. We don’t know if it is temporary,” Cooper said. “But it’s been a positive for the industry. It shows that demand still exists.”