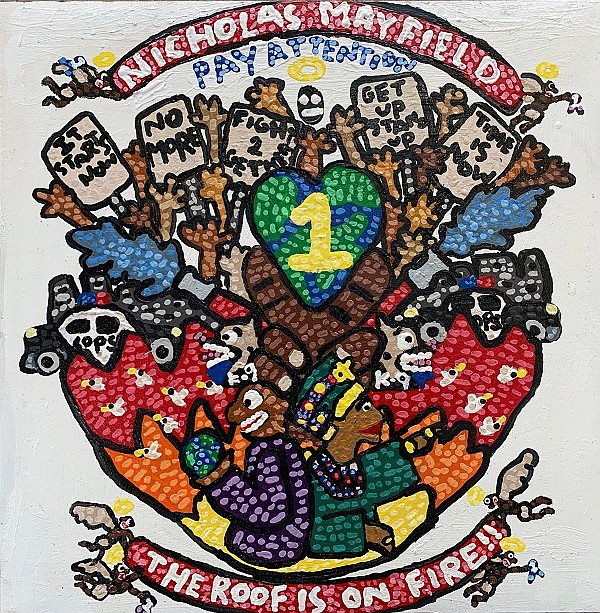 Known for his illustration-style artwork, fashion design and furniture, designer Nicholas Mayfield uses his pieces in different categories to not only offer unique elements of style—he is also extending a helping hand to spread important messages. He is now working with the Los Angeles Music and Art School by donating one of his artistic works for an auction that will benefit the organization.

While the school's 75th anniversary is a milestone that is being celebrated this year, the organization is also hoping to raise funding due to arts programs being threatened through education budget cuts in Los Angeles. Through its silent auction that began on Aug. 12 and ends Sept. 12, LAMusArt hopes to remain a sanctuary for cultivating artist and student talent in music, art, dance and drama programs.

For his part, Mayfield has donated a work titled "Pay Attention," a 24"x 24" painting that illustrates a collage of the social and political issues that are affecting citizens in the United States—particularly those who are black, Indigenous and people of color. Through the chaos, Mayfield's piece also reflects the hope that unity can still be found amid the chaos. The piece is valued at $17,500 retail.

In addition to this important work from Mayfield, other contributions to the auction include a hand-signed LeBron James Los Angeles Lakers Jersey that has been authenticated by sports entertainment-and-authentication company Upper Deck.

The fundraising event can be found through the 32auctions site, which is an organization that hosts silent auctions to support important causes that contribute to the greater good. On Sept. 12, from 8 p.m.-9 p.m. PST, LAMusArt will host a YouTube-streamed concert "Fundraiser: Birthday Bash," featuring Charlotte Mary Wen of "Hamilton." The auction will end at 9:30 p.m. PST, following the celebration. Questions regarding the event can be directed toward Jumi Aluko at jumi@jumialuko.com. Those who would like to RSVP for the event can visit the LAMusArt site.