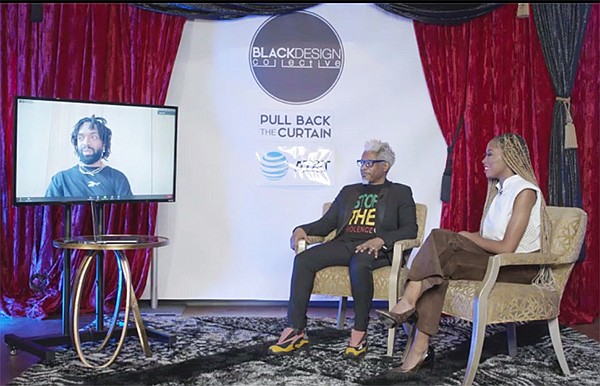 From left, Kerby Jean-Raymond virtually joins TJ Walker and Loren LoRosa for a “Pulling Back the Curtain” conversation on Dec. 6, during which the two venerable designers candidly discussed their experiences in the fashion industry. | Photo courtesy of Black Design Collective

PULLING BACK THE CURTAIN

Pulling Back the Curtain With BDC and Kerby Jean-Raymond

Fashion powerhouse Kerby Jean-Raymond and design legend TJ Walker recently sat in on a Black Design Collective and Ta’Nisha Cameron–produced event called “Pull Back the Curtain: A Conversation With TJ Walker and Kerby Jean-Raymond.” The virtual event and scholarship fund-raiser on Dec. 6 was hosted by TMZ’s Loren LoRosa, with music by DJ Omega, and provided an intimate discussion during which Walker and Jean-Raymond discussed the paths that led them to success in their careers, the challenges they faced, the lessons they learned and using their passion channeled through activism in the fashion space.

Reflecting back on the meteoric launch of his Cross Colours brand more than 30 years ago with co-founder Carl Jones, Walker identified reasons the label has endured.

As Jean-Raymond of Pyer Moss and Reebok by Pyer Moss considers Cross Colours an integral influence on his brand, many parallels exist to the experiences he and Walker had during their respective evolutions within fashion. In the early 1990s, Cross Colours sought to spread peace through bold messaging, yet naysayers who opposed the brand’s colorful, forward approach of unity through nonviolence labeled it as dangerous, which Walker notes created an allure among young people. For Jean-Raymond, a decision in 2015 to precede his Pyer Moss brand’s Spring/Summer 2016 show with a short film highlighting police brutality caused backlash inside and outside the industry. Both Cross Colours and Pyer Moss rebounded, as both brands are stronger, more independent labels than they were in the past. Both designers remain actively committed to elevating Black creative voices in the industry.

“The George Floyd murder that we watched on television created a lot of reactive approaches. Some of them I agree with, some of them I don’t, but I can’t deny that in the beginning my whole purpose was to get people talking about this,” Jean-Raymond explained. “Did it take too long? Yes.”

This sentiment led Jean-Raymond to discuss in greater detail how to examine a potential partner’s commitment to equity in fashion as he revealed his partnership with Reebok was achieved due to the athleticwear company’s willingness to afford creative freedom to the designer. While he noted that progress takes time, Jean-Raymond identified how up-and-coming designers can recognize a message that is genuinely committed to welcoming Black creatives rather than simply tapping into the Zeitgeist of social justice as a trend.

“Anyone who is trying is doing the right thing. If motives are impure, I think repetition will make them pure. All we can hope for is for the message to become more refined, have people figure out how to use their platforms to communicate,” Jean-Raymond said. “How do they discern the difference between diversity and inclusion? Those words were tossed around a lot.”

During the discussion, Walker and Jean-Raymond also shared a great deal of guidance for designers, which was especially helpful for students in the audience attending from the Fashion Institute of Design & Merchandising, Otis College of Art and Design, the Fashion Institute of Technology, Morehouse College, Clark University, New York University and the University of Pennsylvania. Jean-Raymond advised designers to make an honest attempt at succeeding in fashion without investors. Speaking from experience, the designer discussed a predatory lending landscape that could subject fledgling artists to unreasonable contracts they might regret in the future.

“Every time I have to turn over paperwork to pay this royalty, I have this conversation with myself: ‘Why did I do this? Was it really that hard or was I looking for an easy way to get started?’ I had ways to make money,” Jean-Raymond said. “I could have sold stuff on eBay or focused on one or two T-shirts and spun that into my first sample collection.”

Reflecting back on his journey from the ’90s breakout label to a heritage brand, Walker advised emerging designers to recognize that the business is difficult and success isn’t always as it seems. He also recommended beginning with domestic production. Within a market where retailers and consumers demand product quickly, the higher cost of producing in the United States is worth a fast turnaround of quality goods.

During a post-event conversation with California Apparel News, Walker noted this most important advice as he reflected on how Jean-Raymond proved himself as a designer who was genuinely interested in forging quality relationships. “When Carl Jones and I first met Kirby, he made a verbal commitment to us. He said he would contact us once he got on his feet again and got things cleared up with his business. He did that,” Walker recalled. “Your word is your bond. I want people to remember that. That is a way to really forge relationships and your commitment to whatever it is you’re doing and let others know that you’re true.”

Held in collaboration with the event, an auction supporting the TJ Walker Scholarship Fund and educational workshops for Black Design Collective members in 2021 raised $50,000. Information regarding how to apply for the TJ Walker Scholarship Fund, whose deadline is Jan. 30, can be found on the Black Design Collective website at blackdesigncollective.com.