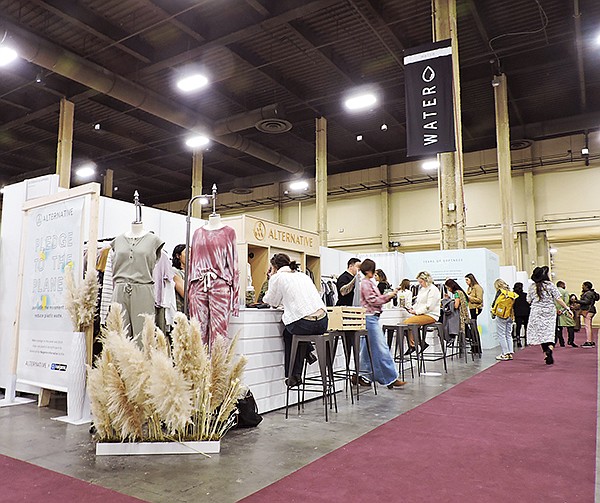 Fashion show at the Tayion booth

Trade-show season is in full swing, with exhibitors reporting good traffic and buyers taking their time but remaining optimistic. With a travel ban implemented on citizens coming to the United States from China due to the coronavirus outbreak, some shows experienced a fewer number of exhibitors from that country. With the first shows starting Feb. 3 and all wrapping by Feb. 7, buyers had five full days to place orders for Immediates and digest the styles they saw coming for Fall.

At the Mandalay Bay Convention Center, the MAGIC brands of the Informa trade shows were hosted Feb. 5–7 with the exception of Sourcing at MAGIC, which began Feb. 4 in

a tent across from the venue. The absence of exhibitors from China was noticeable at this particular show. Britt Moore, director of customer services at Minnesota Knitting Mills Inc., in St. Paul, Minn., said that attendees searched for eco-friendlier wool and cotton. He also mentioned that buyers were noticing the stronger United States presence due to the absence of Chinese exhibitors.

“At this show, the U.S.-manufacturing presence is more known because the Chinese delegation largely isn’t here, so we have a bigger chunk of it,” he said. 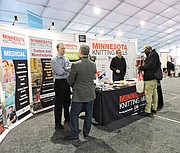 Moriah Banks, founder of Official Para Connect, based in Paw Creek, N.C., was searching for suppliers from different regions to compensate for the issues she has experienced from her Chinese vendors who manufacture the apparel she designs for black sororities and fraternities.

“They are in spring festival, and due to the virus my production got kicked back,” she said. “[With the tariffs], shipping is the same price as my production. I am trying to find more countries I can import from.”

WWDMAGIC produced a market for trend-driven women’s styles, where Paula Unger, creative director of the Dickies Girl brand, said that traffic was about the same as the February 2019 WWDMAGIC show, which meant that business was good.

“It’s extremely busy. We had a lot of appointments,” she said. Unger forecasted that the show would follow a typical trade-show pace. The first and second days would be busy. The third day of the show would be slow.

One of the attendees shopping WWDMAGIC was Barbara Fields, president of the Los Angeles–headquartered trend-forecasting company Barbara Fields Buying Office. She talked about trends that stood out. “Denim, denim and more denim,” she said. Distressed denim was making a comeback as was flared denim. Fields also said that fur jackets were popular. Other outerwear that was popular featured plaid designs and jackets made out of pleather.

At Pooltradeshow, a forum for emerging and art-inspired brands, Sam Culkins of the San Francisco–based brand Culk said that the show started on a solid footing. “People are giving us their time. Line sheets have been given out, and conversations have been started. We hope it continues at a consistent rate,” he said.

Xochitl Avila, creative director of the Los Angeles–based Oooh Yeah! Socks brand, said that buyer traffic was busy and that buyers would be making orders soon. “On day one, everyone is looking. On day two, they start placing orders,” she said.

Teghan Hahn visited Pool while shopping for new looks for her boutique, Austin Rocks, in Austin, Texas. On show floors and the city’s streets she saw flowing clothes. “It’s not hugging the body,” she said. “Last year was about body-conscious styles.”

Project served the sprawling market for men’s contemporary fashions. Different categories of men’s styles were exhibited in different neighborhoods. Among them, The Tents, which exhibited high-end contemporary looks and Project N:OW, which showcases new waves of fashion, and MRket, which focused on men’s suiting.

Vince Marrone, chief executive officer of Paisley & Gray, a tailored sportswear and lifestyle brand based in New York City, said that he didn’t have time to take a break. “I knew it was going to be busy,” he said. “I didn’t know that it was going to be this busy.” A lot of buyers made appointments. But walk-in traffic surged during the show.

William Bates of the Master’s Touch suiting and lifestyle boutique in Baton Rouge, La., scouted new suiting styles at the Paisley & Gray booth. Bates said that he was seeing more slim-fit suits on the market. “But fabrics are being designed with more flair. It’s contemporary, but it pops,” he said.

Project introduced its Denim Room as a new neighborhood produced with the goal of fostering a meeting of denim styles. Exhibitors ranged from emerging, artisanal-inspired denim lines from Japan to established denim lines such as Silver Jeans Co., which runs a design office in downtown Los Angeles.

Kim Carter, Silver’s president of global sales and planning, said the new neighborhood enjoyed a lot of interest, despite anxiety over the coronavirus. “There was a lot of traffic for day one. There were more people than I thought were going to be here.”

Crystal Lindley, a buyer for the Lizzie Girl boutique in Pleasant Grove, Utah, said that high-waisted jeans seemed to be trending and that flared jeans were making a comeback.

On Feb. 5, Informa Markets announced a partnership with MICAM Milano to produce MICAM Americas, an event complementary to the Aug. 17-19 editions of MAGIC and Project. MICAM Americas will serve as the footwear trade event under the Informa umbrella in Las Vegas following the discontinuation of FN Platform.

Popping up at Project Womens

The show floor at Project Womens was the scene for Hanes-owned Alternative Apparel, which is celebrating its 25th anniversary by incorporating more-sustainable initiatives, said Director of Wholesale Sales Amanda Piola Nichols.

“This is our 25th year of softness,” she said. “For our birthday, we made a pledge for 2021 to remove all virgin poly from our production. That is a really big move for us as a brand.”

First-time attendee Steph Kirk was preparing to launch her e-commerce Salt Lake City retail presence Kempt Curated for 20-to-30-something women with a minimalist approach, such as styles found at It Is Well LA.

Over at Stitch at Project Womens, Sheri Assal of the Laguna Beach, Calif., retailer Fierce Inc. wanted XS and S for Summer as her clientele is typically sized on the smaller end. She placed an order with Brave and was on her way to see goods offered by Fate.

At the Fate booth, sales representative Victoria Estrada saw an improvement in traffic over previous events as she fielded requests for trends in tie-dye, neon, camouflage and star patterns.

“This year, Stitch has been a lot busier than last August,” she said. “They want a lot of lightweight sweaters, dresses and there have been a couple of people who wanted Fall items.”

“On day one, buyers study lines, then they start writing the next day,” brand founder Montee Holland said. At this show, they took one hour to study and they started writing.”

Shaq Sampson of the Baggage Claim boutique in Detroit, said that hoodies and jeans seemed to be making a big splash. Biker jeans and painted jeans were trending. Tie-dye designs continue to be popular. “It’s getting aggressive,” he said. “They’re trying to see how many colors they can put on one garment.”

Jeans, biker jackets, blazers and other contemporary styles were exhibited at the Liberty Fashion & Lifestyle Fairs during its Feb. 4–6 run at the Sands Convention Center.

For Los Angeles–based Patrick DiLascia, producing the show in the gamblers’ paradise, Las Vegas, made sense. A big score could change a vendor’s luck.

“If you make one sale with a very big account, you’re fine,” he said, exhibiting his Patrick T-shirts and basics line.

The recent run of Liberty was the first show where it ran solo as former neighboring show Agenda was on hiatus this season. It may have affected buyer traffic, said Jamal Carroll, who introduced his Los Angeles–based basics line Oublier Collective for big and tall men. “We’re taking a hit from Agenda not being here. We feed off of each other,” he said.

Brooke Bailey, co-owner of the Los Angeles–based vintage store Carny Couture visited the show to view trends and shop for new lines. “Everyone is trying to make styles that look vintage. A lot of stuff looks like workwear from the 1930s to 1940s,” she said.

Making moves at Womenswear In Nevada

During its Feb. 3–6 run, Womenswear In Nevada took place at its longtime home, the Rio Convention Center, for the last time before its move to Caesars Forum for its Aug 17–20 edition. WWIN parent company Clarion Events, Inc., announced on Feb. 3 that it would debut fashion accessories-and-jewelry show Adorn, through a partnership with Illinois-headquartered show ILOE. The new addition will launch during the August edition of the event. At Tiger Midwest Associates, founder Jim Tiger and Senior Sales Representaitve Abigail Olaworetan saw buyers who wanted transitional pieces that could retail for under $100.

“It is going to be transitional styles that can flow from winter to spring. More Immediates, but at the same time you have some clients looking for Fall,” Olaworetan said. “A lot of people are going off the color of the year—blue, deep colors and more weight, also in textures.”

In town from Gladstone, Mich., Sassy Butterfly founder Nickie Lauerman was a first-time attendee who wanted to invest in the plus sizes demanded by her clientele of women who are mostly 35 and up.

“I have quite a few customers who want plus sizes, but it’s more difficult to find them or don’t look like a tunic or a tent,” she said. “They want different fabrics. It’s been important to see and touch to find clothing for the curvy girl.”

Always a Bargain at Offprice

The Sands Convention Center was home to the Feb. 3–6 edition of the Offprice show, which caters to bargain hunters. Vanessa DeJoode, owner of the Vanwood Variety Store, picked up swimsuits at Alliance Wholesale Corp. and was pleasantly surprised that vendors have added a category that she has needed.

“We are finding a lot of the vendors are adding work and safety apparel so we don’t have to go to a specific show for that,” she said. “If you come one edition and don’t find something, don’t skip the next, because the vendors are growing and they’re listening.”

Over at the New York–based Alliance Wholesale booth, Michael Reinstein was showcasing apparel including swim goods from Calvin Klein, Ralph Lauren, DKNY, Swim Solution and La Blanca for buyers from every region of the United States.

“If you go to a swim line and you know what they are doing, we buy whatever was in stores a season before,” he said.

Running Feb. 2–5 at the Embassy Suites Las Vegas, the International Fashion Jewelry & Accessories Group show saw serious buyers who were placing orders after dedicating a lot of thought to the items they wanted. Many buyers were stopping by Great Neck, N.Y.’s Secret Box, where sales representative Young Shin noticed a particular trend in toned-down pieces.

“More simple style. They like our brand name—Secret Box,” he said. “At the show, they are taking notes. They want pricing at $4 to $8, but they are willing to pay for the higher quality of our products.”

“I am looking for mostly jewelry and maybe some hats, a few handbag options,” she said. “I am seeing a lot of multi-layered necklaces, and I am looking for things that look similar to the designer lines I carry but at a better price point.”