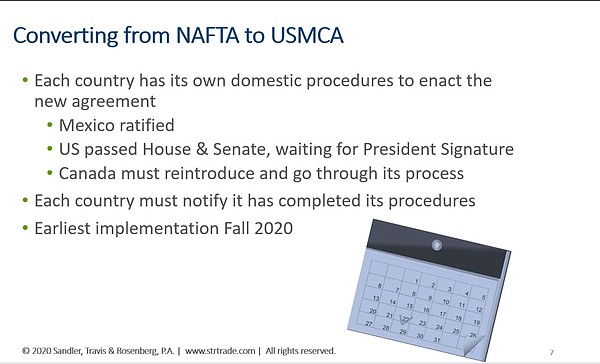 The signing of Phase One of the China trade deal is expected to settle some of the turbulence of the 18-month trade war between America and China that has been pressuring the economies of both countries. A fact sheet from the U.S. Trade Representative’s office said that the trade deal would demand structural reforms in how the Chinese government treats the areas of intellectual property, technology transfer, agriculture, financial services as well as currency exchange. The deal also requires China to significantly increase its purchases of U.S. goods and services in upcoming years.

The USMCA deal will go to President Trump to be signed. But it may take months, perhaps even more than a year, to be in force, said Elise Shibles, an attorney for Sandler, Travis & Rosenberg, PA, which specializes in international trade. While the Mexican government approved USMCA in December, the Canadian government has yet to ratify the deal. The earliest implementation date for USMCA is fall 2020.

“I have concluded that USMCA’s environmental provisions are insufficient, and by not addressing climate change USMCA fails to meet the crises of this moment. Californians know that the climate crisis is already here,” Harris said. Diane Feinstein, California’s senior senator, voted for the deal.

Retail trade groups unanimously hailed the deal. Matthew Shay, president and chief executive officer of the National Retail Federation, said that USMCA would add provisions for a world economy that has greatly changed since NAFTA was passed in 1994.

“This updated agreement will modernize trade among our closest trading partners and pave the way for continued prosperity across the borders of North America as the global economy continues to evolve,” Shay said. “This agreement will support the millions of U.S. jobs that depend on free trade with Canada and Mexico and will ensure the continued availability of affordable everyday necessities for American families.”

“USMCA is a win for the textile industry,” Glas said. “The improvements it makes to the North American Free Trade Agreement will only serve to generate more business for domestic producers and create more jobs and investment in the U.S.”

The promise of increased jobs and investment is rooted in USMCA’s origin rules. In order to qualify for the agreement’s protections and its duty-free treatment of goods, manufacturers will have to guarantee that a number of elements in clothing will have to be produced in the U.S., Mexico or Canada. USMCA’s rules-of-origin provisions demand that parts of clothing sold, such as elastomeric, or elastic-coated yarns, will have to be made in one of the countries participating in the treaty. It also requires certain elements to originate in North America, such as sewing thread, pocketing fabric, narrow elastic bands and coated fabric.

Many of USMCA’s provisions are the same as NAFTA’s, but it also features some changes and updates, Shibles said in a Jan. 16 webinar on the treaty’s detailed rules. Updates include eliminating the requirement that lining fabric in suits and skirts have to be woven in countries participating in the deal. Exceptions were also made for rayon fabric. If few or no manufacturers make specific fabrics in countries participating in the deal, no requirement will be made to produce the fabric in USMCA territory. Short-supply items include cotton velveteen, Harris tweed, and certain fabrics used in men’s and boys’ shirts and boxer shorts.

Also scheduled to be changed is documentation required by the exporting parties. In NAFTA, exporting parties had to fill out uniform documents explaining why goods they were exporting needed NAFTA protection and duty-free treatment. USMCA will allow free-form certification.