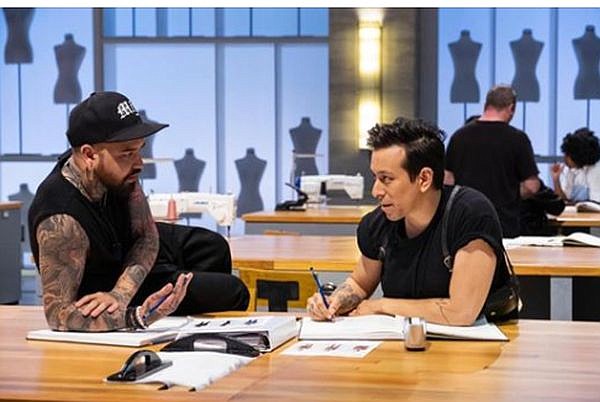 Designers for L.A. Fashion Brands Ashton Hirota and Marco Marco on Netflix's "Next In Fashion"

Another week, another fashion-reality show. But Los Angeles fashion people might prick up their ears for "Next In Fashion," a fashion reality-competition show, which is scheduled to start streaming on Netflix Jan. 29.

L.A.-based rebel fashion designers Ashton Hirota of the Ashton Michael label and Marco Morante of Marco Marco, compete against 16 other contestants on the "Next In Fashion" show. The show is hosted by Tan France of "Queer Eye" and Alexa Chung, who designs self-named Alexa Chung fashion line, along with working on other fashion projects. Show judges include fashion luminaries Adriana Lima, Prabal Gurung, Christopher Kane, Tommy Hilfiger, as well as the Public School label’s Maxwell Osbourne and Dao-Yi Chow. Next In Fashion’s winner is awarded with $250,000 and the opportunity to sell the winning line on designer e-emporium Net-A-Porter.

Hirota said that he had been offered to be cast on reality shows in the past, but he always said no. However, "Next In Fashion" was too intriguing to pass up. This show’s contestants are established designers, many have worked for fashion houses such as Stella McCartney and Alexander Wang. Another plus for the show, Hirota also got to partner in show competitions with long-time friend Morante. “Aesthetically we couldn’t be more opposite,” Hirota said of Morante. “He’s inspired by drag, trans and progressive queer thinking. I’m working in urban, fetish and tactical. I had to compromise for the competition. I felt that I was 19 with a new business partner working to create something harmonious.”

While Hirota had misgivings about reality TV, he said that the Netflix show appealed to him.

“Netflix had a respected global platform, if I had to do any reality show, it would be on that platform,” he said.