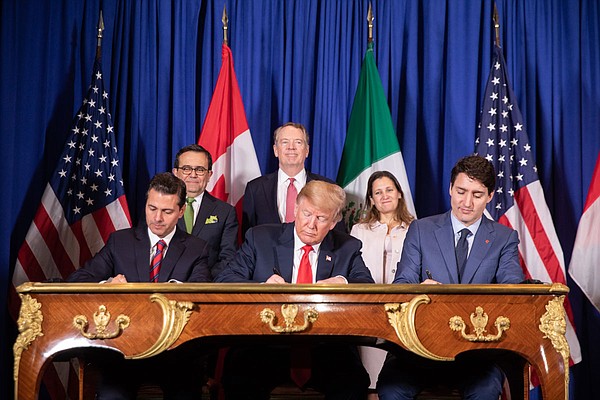 As a replacement for the North American Free Trade Agreement, the United States–Mexico–Canada Agreement was implemented July 1. United States Trade Representative Robert Lighthizer hailed the trade deal as President Trump’s fulfillment of promises that he made during his campaign in 2016, which he said would strengthen the U.S. workforce and economy.

“The USMCA contains significant improvements and modernized approaches that will deliver more jobs, stronger worker protections, expanded market access, and greater opportunities to trade for companies large and small,” he said in a statement. “We have worked closely with the governments of Mexico and Canada to ensure that the obligations and responsibilities of all three nations under the agreement have been met, and we will continue to do so to ensure the USMCA is enforced.”

Following ratification by Mexico in December 2019, the legislation was approved by the U.S. Congress earlier this year, signed into law by President Trump in January and approved by the Canadian Parliament in March. Lighthizer’s belief that the agreement would fortify manufacturing in the United States, aid workers and raise wages was echoed by many representatives of the country’s trade groups that seek to protect the apparel industry. American Apparel & Footwear Association President and CEO Steve Lamar heralded the agreement in a statement on June 30, noting that all requests made by his organization—“remaining trilateral, that it not harm the industry’s supply chains and that it be seamlessly implemented”—were honored.

“With the USMCA entering into force, American businesses are excited to continue to work with supply chains in the North American region,” Lamar said in a statement. “Allowing the agreement to provide structure and avoiding the imposition of unnecessary trade barriers, such as punitive tariffs, will be essential for these American businesses and the American workforce to succeed and prosper under the agreement. Ensuring predictability and lowering trade barriers are always important, but even more so now as we recover from and safely restart our economy in light of COVID-19.”

Also commenting on the negative impact to the United States economy stemming from COVID-19, Lighthizer emphasized the importance of the deal’s support of domestic workers as the country recovers.

“The recovery from the Covid-19 pandemic demonstrates that now, more than ever, the United States must stop the outsourcing of jobs and increase our manufacturing capacity and investment here at home,” Lighthizer said in a press release. “With the USMCA’s entry into force, we take another giant step forward in reaching this goal and advancing President Trump’s vision for pro-worker trade policies.”