After 22-years of selling contemporary women’s fashion on Los Angeles’ La Brea Avenue, the boutique Bleu moved a short drive away to 7378 Beverly Blvd. Bleu’s new location is based in a retail street on the intersection of Beverly and North Martel Avenue in the Fairfax District. Neighbors include the castle-like flagship salon for bridal designer Claire Pettibone, and The Grove retail center.

Bleu owner Gabrielle Zuccaro said that the shop is a new Bleu experience. The 2,400-square-foot space is a couple of hundred feet larger than the old boutique. The new space also features a mezzanine and four skylights. The skylights give the boutique a lighter and airier feel, which is a much different look from the dark wood textures of the La Brea shop, Zuccaro said. At the new space, walls are painted white. Carpets and curtains are pink, and the cash wrap rests on a marble base. 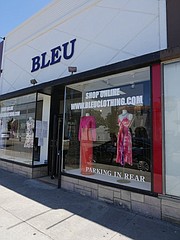 Zuccaro made the move because she felt La Brea had turned into a different neighborhood, and her consumer migrated to different neighborhoods. When she opened Bleu on La Brea, there was a greater presence of women’s fashion boutiques in the neighborhood. In the past few years, La Brea has become a significant hub for high-end men’s streetwear and contemporary styles. La Brea is anchored by pioneering specialty shop American Rag which serves women’s and men’s fashions.

It was also time to make a move. Bleu's lease had expired and Zuccaro wanted to look for different locales.

Bleu’s move to Beverly has been low key due to recent events. Zuccaro moved to her new space a couple of days before the City of Los Angeles issued an order for businesses to shutter to blunt the spread of the coronavirus. She reopened on May 27, but had to close again because of rioting in her neighborhood that weekend.

Fast forward to June 15, the shop made another reopening. Zuccaro hoped this one would go without interruption. However, due to the COVID-19 pandemic, some people have not wanted to venture to a bricks-and-mortar shop, and some of her most loyal customers have not visited the new space. But she has received a lot of walk-in traffic from people in the neighborhood discovering her shop.

“We haven’t even had an opening party,” she said. But she noted that her store's momentum is unflappable. “Nothing is going to shut me down!”