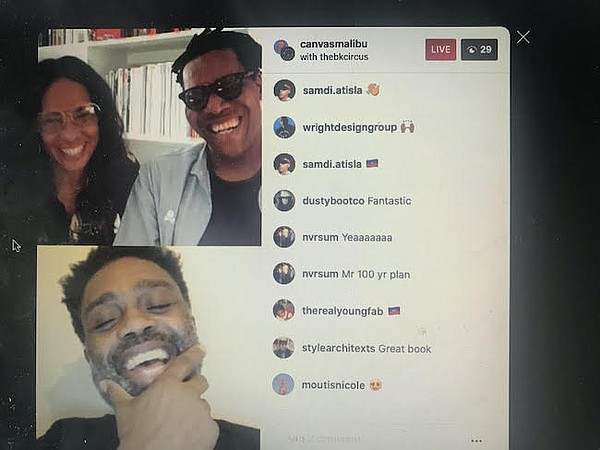 The George Floyd protests have opened a wide-ranging public discussion, and the conversation has reached into retail and fashion. Last week, Jac and Arlington Forbes, the co-owners of Canvas Malibu boutique in the exclusive beachside enclave of Malibu, Calif., produced a talk titled "Race and Retail" on the shop's Instagram Live channel named Canvas.Malibu ‘No Shop.Just Chop'.

This black-owned fashion boutique and art gallery arranged the discussion with another black-owned business, Brooklyn Circus. The Brooklyn N.Y., boutique is famous for its varsity jackets and denim. Brooklyn Circus is owned by Ouigi Theodore, who is also its creative director. The Forbeses and Theodore talked on subjects of concern to every business owner such as raising capital. They also talked about the importance of the moment and how building a brand can be more about selling clothes, Theodore said.

A socially conscious approach has long been part of Brooklyn Circus’ outlook, Theodore said. During the talk, he noted that retailers can make a statement about justice and the solidarity of a community. Retailers can make statements with the brands that they merchandise and develop opportunities for colleagues in their neighborhoods and their communities.

“You end up creating a unique space. You don’t have to end up fighting the guy down the street,” Theodore said of vying for exclusive product. “It gets back to that point the staying power of a good business now. It’s about community.”

During this talk, Theodore and Arlington Forbes also critiqued the bandwagon aspect of major companies declaring support for Black Lives Matter, noting that the social issue may have not been a concern a month ago.

“Inauthenticity is at an all time high right now,” Arlington said. “ I feel that there are companies out there are hashtagging #BLM hashtagging #BlackLivesMatter, but six months ago, nine months ago, they were looking at you sideways when you were in their shops.” A video of the "Race and Retail" continues to run on Canvas’ Instagram profile. It can be viewed on @canvasmalibu.

In other Canvas Malibu news, the boutique recently unveiled a major remodel. The ground level of the two-story space is devoted to the shop’s art gallery, which was named the Forbes Gallery and curated by Jac Forbes. The top level is devoted to women’s styles, men’s fashions, accessories and footwear, Arlington Forbes said. “We want our client to buy less, but buy better,” he said. “Let’s focus on the customer and what really works for them today, and into the future.”