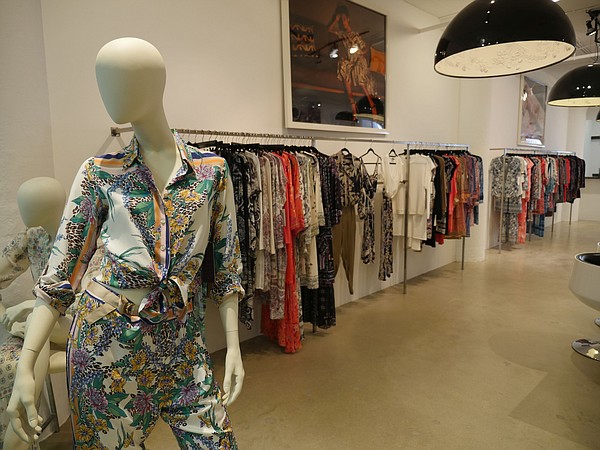 With trade-show calendars stunted and events canceled during the second quarter of 2020 due to the COVID-19 pandemic, apparel-business owners had time to strategize before L.A. Market Week, which ran June 14–18 in the Los Angeles Fashion District. While showroom managers expected a market with light buyer traffic, many were satisfied with the business they received during this uncertain time. Whether consumers are buying through e-commerce methods or shopping through new onsite experiences in curbside or at retail, the buyers who came to town were serious about placing orders, particularly for cozy trends that will carry through to Holiday 2020.

A responsible approach at the New Mart

After implementing a number of safety measures throughout its space, The New Mart opened for market to visitors who were wearing face masks, observed social distancing and received temperature checks. Ethan Eller, who manages The New Mart, was proud of his team, which focused on maintaining a calm, safe environment within the building.

Eme Mizioch of Joken Showroom at the New Mart Building

“We knew it would be a local, regional show. We weren’t going to get people from New York or Europe,” he said, adding that 60 percent of showrooms were open and 50 to 60 buyers were in attendance. “They were writing quite a bit of business, and the tenants said their manufacturers are waiting for the orders to come in so they can produce the goods and ship them.”

For Rande Cohen, who manages her eponymous showroom, safety precautions weren’t the only shift during L.A. Market. The buyers who showed up to her space were certain about placing orders and arrived ready to do business.

“Everyone who came in was positive. It was refreshing. They wanted to write business, so that is what we did,” she said. “We had a handful of appointments and some stop-ins. Whatever I got was more than I had before. The people who were here were ready to write, and I didn’t see any hesitation. There was no panic, no anxiety. It was basically, I am here to write and I want to write it right."

With the high demand for comfortable clothing, Cohen was writing out into Holiday. Of particular note was the P.J. Salvage line, whose popularity is driven by luxurious lounge and sleepwear pieces that have been trending for months.

“Soft fabrics and fun prints, sweats, loungewear—the fourth quarter is big for that category and it is now because that is what people are drawn to. I wrote a lot of the casual, soft, cozy, soothing items,” she said. “The people who did very well last year need to match their numbers from last year as opposed to looking at this year. There was no question of ‘what if?’ It was efficient.”

At the Hale Bob showroom, Cathy Cooley was responding to texts and emails from buyers who needed product. While she didn’t see the traffic of a regular market, she said business was good considering the current climate. Buyer traffic through her showroom was mainly from those who are California-based clients, with a few from other western regions.

There has been a shift in demand from her clients. During the latter part of the first quarter of 2020, when stay-at-home measures were just beginning and consumers were acclimating to working from home, comfort was most important.

"[At the beginning of COVID-19], a lot of my stores pushed out their orders, but then they tweaked or revised based on current selling because in the beginning there were no weddings or things like that,” she said. “It tended to be that people wanted really easy tops to go with leggings or jeans or whatever.”

While the market brought reorders, with a bit of Fall, Cooley’s clients wanted to have fresh pieces that could elevate the spirits of their customers.

“They are sick of wearing the same thing,” she said. “They want a nice, easy dress that they can wear with sneakers"

Before the June run of L.A. Market Week, Israel Ramirez, owner of the Siblings Showroom in the Cooper Design Space, sent emails to 150 retailers to invite them to market. He knew it was a tough sell because people were still worried about the spread of COVID-19 and stores were just beginning to open after a shutdown that started in March.

By the time market started, Ramirez had only got four appointments from retailers who said they would attend. Ramirez didn’t let it get him down.

“I have to take orders where I can,” said Ramirez, who represents brands including Veronica M, Tiare Hawaii, Pink Martini and Sahira Jewelry.

But the retailers who visited the Siblings Showroom wrote orders. One of them was Robin Bernardoni, owner of several boutiques in the Sacramento, Calif., area, which go under the nameplates of Runway Boutique and Button Up. She felt that she needed to make the flight to the L.A. Market as she was behind in buying. “We have nothing ordered for Fall,” she said.

Since businesses started to reopen in May, Bernardoni thought it was safe to take in-person meetings. She also preferred making buying decisions at showrooms and said she would only trust buying through FaceTime and Zoom with the brands she knew very well.

“I need to see it and touch it—even the best pictures can’t show you everything,” she said of shopping for goods from new brands.

The COVID-19 pandemic has changed Bernardoni’s buying. “People want comfy, versatile and soft,” she said. Sweaters and casual clothing are important for Fall.” She also forecasted that in-person markets would make a comeback. “I honestly think that people will be ready to go to the August market. This market was a little too soon,” she said.

Despite many businesses just beginning to open after a pandemic slowdown, many independent showrooms doing business at the Cooper were exhibiting Fall lines, said Mona Sangkala, leasing agent at the Cooper Design Space. She said it was a unique time. But there was opportunity.

The June run of L.A. Market started with a digital shift at the California Market Center, said Moriah Robinson, the CMC’s events director. She said that the CMC had been developing a greater digital presence.

“[We’re] spotlighting both brands and retailers on our blog and social media,” Robinson said. “We identified showrooms who are offering Immediates, and we updated our directory to reflect all CMC showrooms who were accepting virtual appointments and/or who utilize digital selling platforms for buyers unable to travel for in-person appointments.”

The shift was definitely in spirit with the times, said Ernesto Mantilla, a partner in the Betty Bottom Showroom. During this market, and for the past few months, he’s done a lot of his business remotely through Zoom and FaceTime. He will continue to develop this avenue of sales. His next projects include producing video presentations on the collections in his showroom, which include the Turkish brand IPNG; Cupcake, which is made in Thailand; Flutter, which is made in Indonesia; Moonlight, which is made in Los Angeles; and the vintage-inspired Effie’s Heart 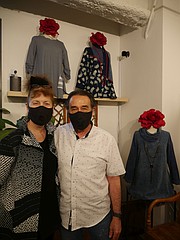 Betty Bottom Showroom at the CMC

Mantilla also said that business is beginning to blossom since the economic freeze from the pandemic started to thaw. “Customers are beginning to call us to renew orders,” he said.

While there was a lot of talk on doing business through Zoom, CMC showrooms also worked on in-person appointments, said Alexandria Merchant, a sales representative and showroom manager for the Frank Lyman Design label.

The showroom handled a few appointments during the first couple of days of June market. However, Merchant forecasted that she and her colleagues would have to meet their clients on their turf. “We’re going out on the road,” she said.

The pandemic has influenced the types of products buyers are interested in. Eloise Goldberg, owner of the City Lites boutique, located near Palm Springs, Calif., said that she ordered Berek face masks from the Sharon Koshet Sales showroom. “It’s the new fashion accessory,” Goldberg said.

“I was leery of ordering too many. I didn’t know how long it was going to last,” Goldberg said. “Now that [Gov.] Newsom has made a new ruling that you have to wear them all the time, I think they are going to be around for a long time.”

Goldberg also reported ordering more tops than in the past, selling two times more than bottoms.

No market, no problem at the Gerry

During this season’s L.A. Market, the Gerry Building didn’t host an official market, but buyers did stop by for appointments with showrooms. Michael Cruz at the building’s management office was optimistic and looking toward the future.

“We had some buyers who were curious. We told them to wear their masks, and most visits were appointment based. The tenants are very much like, ‘We are in this together.’ Everyone is looking at the bright side of it,” he said. “We're looking more toward October for Majors and, hopefully, if everything goes well, that is when we'll start.”

At Left Coast Apparel Sales, Chris Watkins, the showroom’s owner and sales representative, said that business remains good. In the streetwear market, his clients need product to meet the needs of customers who consistently seek looks that are fresh and new. These consumers have been home for months and have saved up money to spend.

“That customer always needs an outfit, even in the midst of a pandemic, if he is going live on [Instagram],” he said. “My retailers in the months of April, May and now June—those who are open or have businesses where they ship with PayPal or directly to their customers—they’re doing business as normal.”

Another reason Watkins has remained optimistic about business is the fashion trend that heralded face masks, not as emergency products but as an accessory well before the COVID-19 pandemic. With brands including Black Pyramid, Eternity, Roku Studio and Pro Standard—which hold team licensing for the National Basketball Association, the National Football League and Major League Baseball—prepared to shift fashion-mask making into personal protective equipment, many of the brands that Watson represents were able to hold steady in the storm. For most of his partners, the horizon seems bright, but there are a few retailers who have been affected by recent tumultuous events.

“In streetwear right now, business is booming for a lot of guys. I had a few guys that were vandalized and looted in Southern California and Northern California, but overall business is pretty good,” he explained. “As far as streetwear that is led by BBC [Billionaire Boys Club], Ice Cream, Cookies Clothing and other brands I represent, those guys are doing good nationwide.”