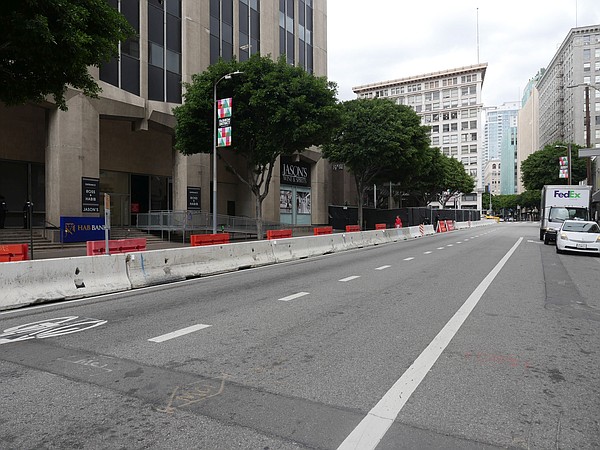 Showroom buildings in downtown Los Angeles’ Fashion District remained open on March 16 when local and state governments urged businesses to work from home to blunt the spread of the coronavirus.

The district’s building managers also advised their tenants to work from home. Activity and traffic on the fashion district’s main drag of 9th and Los Angeles streets was at a low point because many of the district’s workers were telecommuting.

However, the district was not a ghost town. People were working in showrooms and restaurants were open. Management office staff, security and maintenance staff for The New Mart, one of the district’s prominent buildings, would continue to come to work, said Ethan Eller, The New Mart’s general manager.

“We don’t believe that we are at risk of spreading the disease because we are observing best practices,” Eller said in New Mart’s office. “I would not be here if I was at risk. I certainly would not risk my employees’ health.”

While Eller maintained that the building would continue to be monitored by his staff, in an email sent March 16, he urged tenants to work from home, if possible. The building's sample sales that were originally scheduled for March 27 have been canceled.

The L.A. Fashion District Business Improvement District suspended its 2020 annual meeting, scheduled for March 19, as well as all of its public meetings for the next month, said Rena Leddy, the BID’s executive director.

She also noted that the BID’s Clean & Safe team have been taking added precautions for cleaning its equipment and the field office.

The BID is beginning a survey of the 4,000 businesses in the district. Surveyors will gather information regarding the businesses that are still open and what the BID can do to help promote their goods and services during the crisis. The BID also hopes to advise regarding the kind of relief packages federal, state and local governments can offer to the BID’s businesses.

For more information on disaster relief, Leddy requested that those who work in the district visit the BID’s website at fashiondistrict.org/BID-updates.