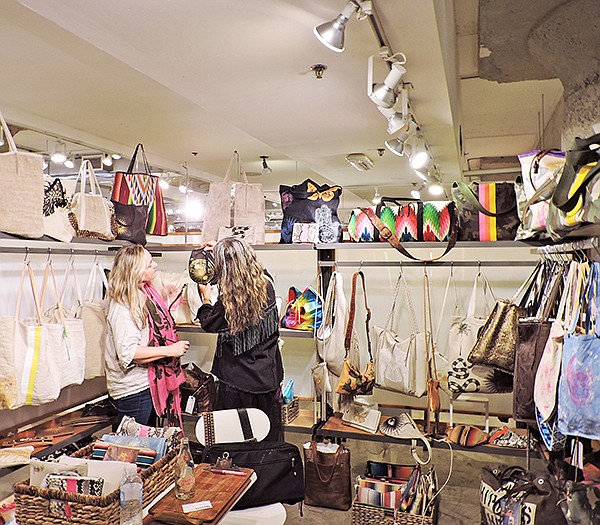 L.A. Market Gets In Under the Wire Before Multiple Trade-Show Cancellations

As the world continues to navigate through the COVID-19 pandemic, a number of apparel-industry trade shows and markets have announced that they will be postponed or canceled. Last week, Dallas Market announced the postponement of its March event until June as producers of the April Atlanta Apparel revealed they would do the same.

Making the cut right before the final wave of trade-show cancellations were announced, meeting places were closed or limited, and social distancing became part of daily life, L.A. Market Week was hosted March 8–11 in the city’s downtown area. With major shows held at the California Market Center, Cooper Design Space, Gerry Building and The New Mart, buyers descended upon the neighborhood in an attempt to stock up on product prior to the coronavirus crush. While many postponements and closures were announced within the last seven days, buyers and showrooms during the market made preparations for hitting the sales floor after the dust settles. 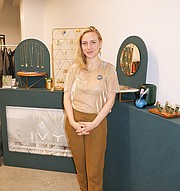 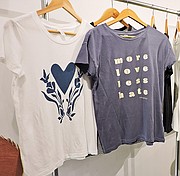 A new trade show called O2 made its debut on the 13th floor of the California Market Center during market. Produced by fashion veterans Eveline Morel, Lisa Elliot and Garret Gooch, the show focused on sustainable fashion, accessories and homewares brands.

“It’s our way to do something about climate change,” Morel said. “It is time that we have a place that is exclusively focused on sustainable brands.”

One O2 vendor, Kindom, applauded the show for creating a sustainable forum. “It was well curated. We met some amazing, like-minded people in the sustainable world,” said Glynn Barrish-Carroll, Kindom’s operations and merchandising director. Also at the show, she conducted talks with eight new retailers who were located in the Los Angeles area in addition to buyers from Idaho and Chicago.

The Label Array trade show also made a run during Market Week. Produced on the 2nd floor of the CMC, it exhibited a range of goods such as footwear, jewelry and apparel.

Tamara Conti exhibited the OTBT footwear brand. “I saw customers, I wrote orders,” she said. The first day of the show was solid, but rain put a damper on the other days of the show, she explained.

The March L.A. Market represented the first time that many veteran CMC showrooms introduced their new spaces on the fourth floor of the CMC’s C building.

Ernesto Mantilla of the Betty Bottom Showroom said that the new showrooms were a success. “We were busy,” he said. His showroom enjoyed a lot of traffic during market, but appointments slowed down on the last day. Overall, business was solid, he said.

There is a range of opinions at every trade show, and the March L.A. Fashion Week was no different. Rose Marie Migliazzo introduced a new space for the Romy M Showroom on the CMC’s 4th floor. She said traffic was down because some buyers were confused about the location of the new showroom wing and where they could park their cars around the CMC. “Also, a lot of people don’t want to travel with everything going on in the world now,” Migliazzo said.

In town from Birmingham, Ala., for the Manhattan South boutique, Lesley DeCastro Vedel and Nancy Jones were shopping the Cooper for Immediates, Fall and Holiday. For Fall, they wanted tailored garments including blazers and visited Place Nationale, the Sabrina Showroom and Anonymous 213.

“I did my opening buy here in 2006,” explained DeCastro Vedel, president of the business. “I still do New York and all of that, but I like coming here because I can find some of the smaller brands that can’t spend $50,000 on a booth.”

At the Bella Dahl showroom, Kasey McKenna and Piper Bue had buyers visit with interest in Fall pieces in animal prints, tie-dye and camouflage in addition to copper tones and merlot hues.

“Our Fall collection expanded into other categories that we haven’t always had,” McKenna explained. “The layering pieces—sweaters, coats and jackets.”

For market, some clients canceled their visits to Los Angeles. Not shying away from a challenge, the women met with their buyers through other methods such as FaceTime meetings.

“They’re still buying Fall,” Bue explained. “They are cautious about the whole situation.”

The Brand Assembly show brought out brands such as Souvenir, whose Los Angeles–based founder, Stefanie Anderson, saw buyers from coastal California regions including San Francisco, Santa Barbara and Newport Beach to examine garments made with partners from around the world.

“With China, it slowed things down, but we do things in India, which hasn’t been impacted yet,” she said. “The people we work with are accommodating, and we do small production, so that helps.”

Shopping for her recently launched e-commerce boutique Sundrift, buyer Elaine Sakaue made the shift from a denim-merchandising role to helping consumers find brands that are rooted in sustainable, ethical or charitable missions. For Fall, she wanted easy knits in browns and ecru that she could price between $100 and $200. Sakaue was excited to see Whimsy + Roe and Thatch jewelry.

“I am visiting vendors I am working with now and new ones that have the same ethos I have in my store,” she said. “It’s great to be part of that change that is happening. People are starting to demand it, so companies are starting to change their manufacturing processes.”

Bringing the socially conscious message from her North Carolina–based business Half United, Carmin Black exhibited her ethically handmade goods, which retail between $34 and $300 and whose proceeds fight child hunger.

“Our products have to fit the aesthetic of a buyer’s retail location. If it fits and the story resonates, that is even better,” she said. “We are great for a West Coast buyer and West Coast customers.”

At The New Mart, visitors were ready to buy accessible lines. Locally made pieces were checking with buyers who wanted to avoid any extensive delays, according to Florence Ratzsch of the Lynn Girard Showroom, where she sold Immediates for the Los Angeles–made Eva Varo line.

“They can turn it around in three to four weeks. It’s all made here in L.A. and custom made to order. People are pretty spoiled with that line,” she said. “They don’t use zippers or buttons from China. For some lines, even if it’s made here, the zippers and buttons are made in China. We don’t have that issue.”

Visiting the Designers & Agents show from Westport, Conn., Rachel Shapiro was standing in for her mother, Kitt, who didn’t want to travel during the outbreak but wanted to buy for her West boutique, which is an East Coast shop that sells West Coast styles. Shapiro noted that the pieces sold at the boutique transition well between seasons and obligations within daily life.

“We are excited to continue working with the brands that we know because even if its delayed the stuff has sold so well,” Shapiro explained. “Because of the weather in Connecticut, it lasts a while when it gets there. If it takes a minute to get our orders in, it will still be just in time.”

At the Totem Salvaged booth, founder Stephanie Larrowe described the week as “the weirdest market ever.” Buyers were visiting her booth where sweet spots averaged $125 wholesale, and while there was business to enjoy she noticed that the quick turnarounds she could offer were resonating more with buyers from Colorado, Arizona and the Bay Area.

“Sustainability is important and made in L.A.,” she said. “Quick turnarounds are important to people. There is novelty in my line.”

For Susan Testa, owner of Romantiques in Los Gatos, Calif., continuing to serve as a trusted local retailer and remaining relevant was important to her business, which has been open since 1994. The threat of the coronavirus was leading Testa to update her website, whose e-commerce presence she feels will help as the reach of the pandemic continues to expand.

“I’ve been thinking about how to promote our website more,” she explained. “We are a small boutique, but as things get more intense people might not come in, so we’re going to prepare our site.”

Steady at the Gerry

Inside the Gerry Building, buyers were visiting the trusted showrooms with whom they enjoy established relationships. While there was a noticeable effect of reduced traffic from appointment cancellations due to the coronavirus threat, business was still good.

Stan Morris of the Morris Agency rented a temporary showroom at the Gerry during the market. He said that business was good despite rain and anxiety over the coronavirus epidemic. “I’m pleased. I worked harder than I expected though,” Morris said. He estimated that 20 percent of his appointments were canceled due to the coronavirus fears.