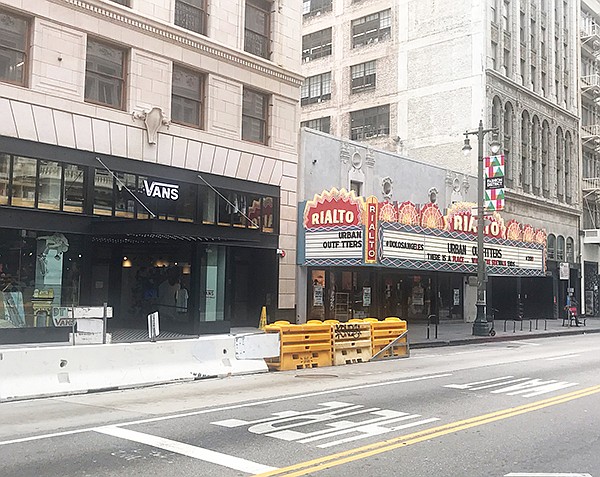 Vans and Urban Outfitters stores temporarily closed on Broadway in downtown Los Angeles, which was empty due to coronavirus closures.

Retailers and malls joined in the effort to curb the spread of the coronavirus pandemic by temporarily shuttering stores this week as the economies of California and the U.S. moved into a recession, said a report from the UCLA Anderson School, which was released on March 16.

Scaling back economic activity pushed the nation and the state into a recession, the UCLA Anderson Forecast said. The U.S. economy enjoyed a solid start in 2020, but the drop in economic activity pulled back growth for the first quarter. First-quarter growth is now scheduled to grow by only 0.4 percent, according to the forecast. The economy is expected to shrink by 6.5 percent in the second quarter and 1.9 percent in third quarter.

Employment in California will take some big hits, according to the March 16 forecast. Unemployment is forecasted to climb to 6.3 percent by the end of the year. The state will lose 280,000 jobs by the first quarter of 2021, and more than one-third of these jobs will be in leisure, hospitality, transportation and warehousing.

The forecast was released during a week when lights were dimmed on American public life. In Los Angeles, Mayor Eric Garcetti ordered the closing of bars, dine-in restaurants and gyms in the city’s boundaries until March 31.

Workers stayed home to contain the spread of the coronavirus. Election rallies were canceled. Seasons for major league sports were put on hiatus. The Disneyland Park was closed until March 31.

Cargo traffic at Los Angeles County ports was hit by the crisis. Cargo traffic for the Port of Los Angeles dropped by just under 23 percent in February due to efforts to curb the spread of the pandemic from Asia, according to a note from the Los Angeles Economic Development Corporation’s Institute for Applied Economics. Cargo volume is expected to drop more in March.

On March 19, Los Angeles County and city officials announced a new order directing all indoor malls and non-essential retail businesses to close. L.A. County Supervisor Kathryn Barger said, “We won’t have to maintain these restrictions forever, and they will have an invaluable long-term impact.”

Days before the order was issued, prominent malls across the state voluntarily went on hiatus. They included, South Coast Plaza, based in Costa Mesa, Calif.; Beverly Center, in Los Angeles; and Westfield Century City.

The Simon Property Group announced that it would close all of its retail properties including its Premium Outlets and Malls locations from March 18 to March 29. Simon runs California malls including Fashion Valley in San Diego; the Brea Mall in Brea, Calif.; and the Del Amo Fashion Center in Torrance, Calif.

Parks and green spaces in Caruso retail properties such as The Grove will remain open, according to a statement from Rick Caruso, founder of his self-named Caruso company. Caruso encouraged the public to visit his properties’ parks as long as they observe social distancing. Hand-sanitizer stations will be made available at all park entry points.

“Our focus remains on supporting the health and livelihood of our employees while caring for our customers and communities,” Syngal said. “We will provide our impacted store employees with pay continuity and benefits during this two-week period. And, together, we look forward to welcoming our customers back in our stores soon.”

The turn of events is unprecedented, said Jeff Van Sinderen, a retail analyst for B. Riley FBR.

“No one has ever seen anything like it,” he said. “I can’t think of a time when retailers said that we are closing all of our stores due to a virus.”

Any retailer with a bricks-and-mortar division would take a big hit. “You can shift some sales online, but they won’t match the sales that you missed,” he said.

Small businesses must navigate this crisis by exploring financing options and communicating frankly with their customers, said Syama Meagher, CEO and founder of the consultancy Scaling Retail.

“First, it’s time to be actively accessing lines of credit. It’s also time to access loans from the Small Business Administration,” Meagher said. “Look to leverage relationships to get extended terms for vendors. Now is a good time to negotiate on raw materials. Buy yardage when prices are low. If you are planning on a shoot, see if you can negotiate better rates.”

In its research note, the LAEDC’s Institute for Applied Economics said that specific economic policies should be put into play to help businesses and individuals. They include short-term universal basic income, a moratorium on rent and mortgage payments, a temporary suspension of evictions and foreclosures, and, when possible, zero-interest loans or, minimally, collateralized loans should be offered to vulnerable businesses such as those recently announced by the Small Business Administration’s emergency loan programs.