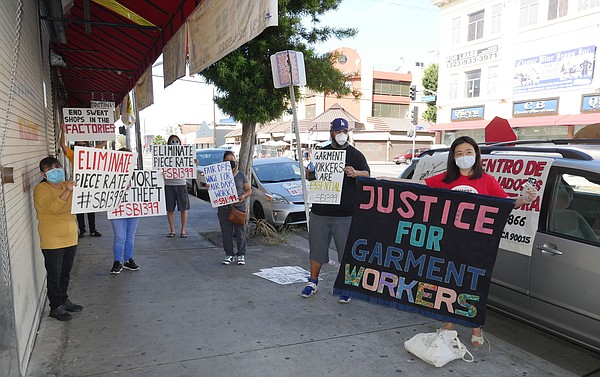 Garment workers-rights supporters protest on May 14

Labor leaders received a boost on May 14 when SB1399, the Garment Worker Protection Act, was approved by four out of five members of the California State Senate Committee on Labor, Public Employment and Retirement. Now, SB1399 moves to the Senate Appropriations Committee, though no hearing on the bill has been scheduled.

The bill is intended to expand wage-theft liability in the garment-manufacturing industry, said Marissa Nuncio, director of the Garment Worker Center, one of the cosponsors of the bill.

“There’s definitely more opportunities for enforcement. That’s the goal,” Nuncio said. “With expanded liability, there’s opportunity, via inclusion of more-responsible parties, that workers will be able to recover their unpaid wages.”

In SB1399, retailers would be responsible for the wages of people employed by contractors who produced the goods. In the past, labor advocates have critiqued a common retailer’s defense in past wage disputes. The defense was that contractors are solely responsible for wages for items sold at retailers’ stores. There were too many loopholes in a previous law covering this issue, AB633, and it created opportunities for wage theft, SB1399 supporters said.

It also requests to eliminate piece-rate pay by which workers are paid by the pieces they finish. The law would require these workers be paid an hourly wage. Another feature of SB1399 would authorize the state labor commissioner’s Bureau of Field Enforcement investigators to issue citations across the entire supply chain, not just the contractors.

SB1399 was authored by California State Senator Maria Elena Durazo, a Democrat who represents East Los Angeles, parts of downtown Los Angeles and neighborhoods surrounding downtown. Sponsors of the bill included the Garment Worker Center, Bet Tzedek Legal Services, the California Labor Federation, and the Western Center on Law and Poverty. On May 14, representatives for these groups participated in a car rally to support the bill. About 35 protesters drove in a caravan of 15 cars through downtown Los Angeles. The cars bore signs with slogans of support for the bill.