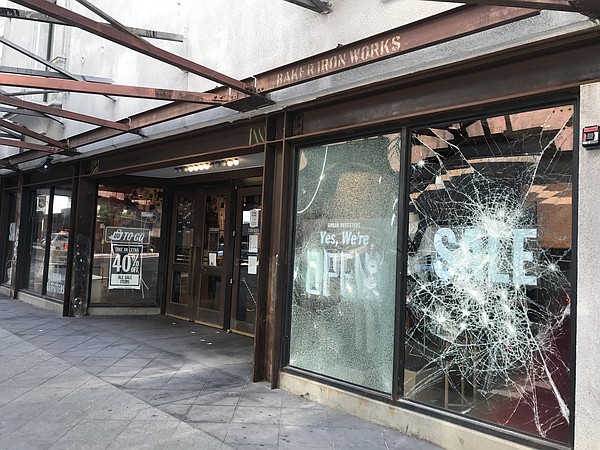 Following the May 25 death of George Floyd, an unarmed black man who died while in police custody in Minneapolis, protests have sprung up across the country in major cities including New York, Chicago and Los Angeles. After Floyd was restrained face down on the ground, he died following an extended period of time when officer Derek Chauvin pressed his knee against Floyd’s neck while three other officers surrounded them. During the night of May 29 and early morning of May 30, businesses in downtown Los Angeles were looted as violence followed protests in several major American cities.

In downtown Los Angeles, windows were broken and merchandise was stolen from restaurants, pharmacies, as well as jewelry and fashion boutiques in the city’s Historic Core and Fashion Districts on May 29. The Los Angeles Police Department arrested 553 people on charges such as failure to disperse, burglary, looting and battery of a police officer. All but 18 of those arrested were later released, according to an LAPD statement, and six police officers sustained non-life-threatening injuries.

Rena Leddy, executive director of the LA Fashion District Business Improvement District, said that on May 30, her group was assessing the financial damage to the Fashion District where many fashion brands maintain showrooms and offices. For the past seven years, the area had been going through a major revitalization where prominent places retailers such as Vans, Urban Outfitters and Acne Studios had opened high-end flagships.

She estimated that 90 percent of Fashion District businesses had not incurred damage, but a handful, such as the Terroni restaurant on 802 S. Spring St., had been looted.

“When I drove through downtown [Saturday morning], I cried,” she said. “This is a major punch. I know businesses can come back. But they were already struggling because they shut down for COVID-19. On the bright side, you can drive through a majority of downtown and think that nothing happened.”

The BID Clean and Safe security team had patrolled the district throughout the night. BID workers also had taken some garbage cans off the street during the weekend, so the objects would not be used to smash through windows, she said.

Many retailers that did not sustain damage had boarded-up their businesses’ windows, Leddy said. Some Fashion District retailers were open for business.

Jerry Bakhchyan, owner of JB Clothiers, a Fashion District bespoke suiting shop, hosted a fitting appointment on the morning of May 30. A client needed to come in to start working on a bespoke suit. Bakhchyan said that he felt comfortable doing business despite events of the previous night.

“We are fortunate,” Bakhchyan said. “Last night I was watching the news. Helicopters were flying over this corner. Clients were sending me pictures and messages, asking ‘Are you OK?, ‘ ‘Is your store OK?’ It shows me that we are all humans, and we all have to endure. At the same time, this was unnecessary.”

Other business owners had to deal with the grim job of cleaning up after the riot. However, some of these retailers also told tales of heroism during the night of violence. Customers and friends of Esentialle, a boutique selling vintage and new fashion on 650 S. Spring St., stood in front of the store to prevent looters from stealing clothing, said co-owner Adriana Jara. However, a store window was smashed. By the morning of May 30, workers from the building’s management company had to clean up the store site.

Jara and Esentialle co-owner Rafael Maquiling started business earlier this year on what is their first retail venture, but the shop’s first year was challenged by having to shut down for the COVID-19 pandemic, and then having to deal with the violence of the last few days. Jara said that she was thankful for her neighbors contacting her about looters menacing the store, and then standing guard. “We didn’t know that it was going to get this bad, but they really helped,” Jara said of her store’s friends.

By early evening on May 30, Los Angeles' Mayor Eric Garcetti announced a curfew for the downtown area that would remain in place until the morning of May 31.

"We will always protect free speech and Angelenos’ right to live without fear of violence or vandalism," he said. "To increase safety for demonstrators, law enforcement and all citizens of Los Angeles, we are putting a curfew in place from 8 p.m. to 5:30 a.m."