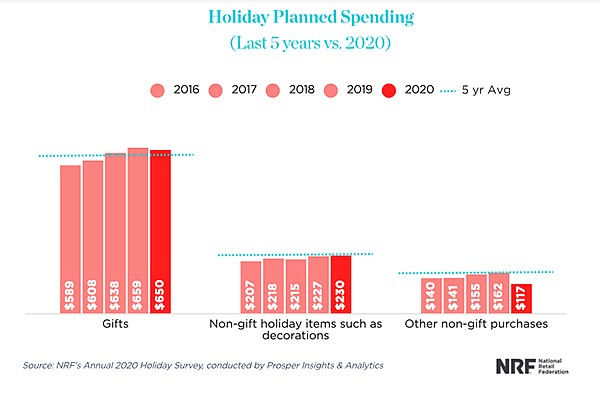 The NRF’s Annual Holiday Survey predicts less than a $10 drop in holiday spending over 2019. | Photo courtesy of National Retail Federation

2020 has been a year like none other in recent memory, but despite the big issues of a divisive election and an economic slowdown driven by a pandemic, economic forecasters working with the National Retail Federation and Deloitte are predicting solid business during the 2020 holiday season.

Holiday business will be driven by consumers in the United States, who have proven to be steadfast shoppers, said Matthew Shay, president and chief executive officer of the NRF, one of America’s most prominent retail trade groups.

“Consumers have demonstrated their resilience and adaptability throughout these extraordinary times,” Shay said in a statement. “Looking ahead to the holiday season, retailers will ensure that their stores are safe for both customers and employees as we all prepare to celebrate family and friends during this special time of the year.”

The NRF surveyors forecasted that digital commerce would experience skyrocketing sales for the holiday season. About 60 percent of consumers surveyed said that they planned to purchase gifts online this year.

The NRF will release a more-thorough holiday forecast later in November, according to an NRF representative. This forecast will include predictions on how sales could grow during the holiday months of November and December.

However, the holiday season has not started in earnest, and analysts are expecting that news from the presidential election will influence the season. Jeff Van Sinderen, a senior analyst for B.Riley Securities in Los Angeles, said that more data must be processed before accurate forecasts can be made.

Consumer confidence looked somewhat downbeat in October, according to Lynn Franco, senior director of economic indicators at The Conference Board, a New York–headquartered nonprofit research group that conducts surveys of consumer confidence monthly.

“Consumer confidence declined slightly in October following a sharp improvement in September,” Franco said in a statement. “Consumers’ assessment of current conditions improved while expectations declined, driven primarily by a softening in the short-term outlook for jobs. There is little to suggest that consumers foresee the economy gaining momentum in the final months of 2020, especially with COVID-19 cases on the rise and unemployment still high.”

In September, Deloitte, a prominent auditing and consulting company, released a holiday forecast. Deloitte analysts predicted that holiday retail sales would increase from 1 percent to 1.5 percent compared to holiday 2019. Holiday retail sales will range from $1.147 billion to $1.152 billion. However, holiday sales will not be as good compared to holiday 2019’s business, said Daniel Bachman, Deloitte’s U.S. economic forecaster. “The lower projected holiday growth this season is not surprising given the state of the economy. While high unemployment and economic anxiety will weigh on overall retail sales this holiday season, reduced spending on pandemic-sensitive services such as restaurants and travel may help bolster retail holiday sales somewhat.”