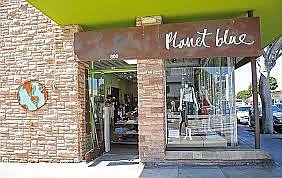 Planet Blue’s Santa Monica location is one of the company’s 12 bricks-and-mortar to close, though the brand will maintain an online presence.

Planet Blue to Close Its Bricks-and-Mortar

Since 1995, Planet Blue has sold swimwear and contemporary, beach-inspired styles with a bohemian edge for women at its bricks-and-mortar stores and on its digital channel, shopplanetblue.com. Earlier this month, the shop announced through email and its social-media channels that it would be closing its 12 physical shops while maintaining an e-commerce presence. The store closures have been attributed to the economic fallout from the COVID-19 pandemic, said Eddie Bromberg, Planet Blue’s chief executive officer.

“We’re trying figure out a way to move forward with digital and ultimately the proprietary brand Blue Life,” Bromberg said.

Bromberg forecasted that the physical stores would probably shutter sometime in the first quarter of 2021. Planet Blue founder Ling-Su Chinn and the retailer’s equity partner, Breakwater Management,are evaluating the retailer’s next steps, he said.

He anticipated that Planet Blue’s more than 100 retail employees would lose their jobs. “Employees and customers are the biggest victims,” he said. “We really care about them and what they have done for us.”

Nicole Pollard Bayme, founder of the fashion-styling firm Lalaluxe, said that Planet Blue has been influential. Reflecting on the brand’s influence on trends by offering a Southern California twist, Pollard Bayme explained that Planet Blue’s offerings transitioned easily as its customers aged and its pieces were versatile to wear in different settings. While she agreed with the brand’s move away from bricks-and-mortar retail, she did hold one of its locations close to her heart.

“Planet Blue is the epitome of SoCal beach chic and was a launchpad for many budding influencers to start their careers. Their casual clothes catered to Malibu and Santa Monica residents from teen years through adulthood. It was the perfect stop pre-vacation, for a date night or a comfy pair of sweats,” she said. “I think the pivot is extremely smart, although personally I wish they would keep their Malibu store because I love browsing and picking up a little something special after lunch at the Malibu Country Mart.”