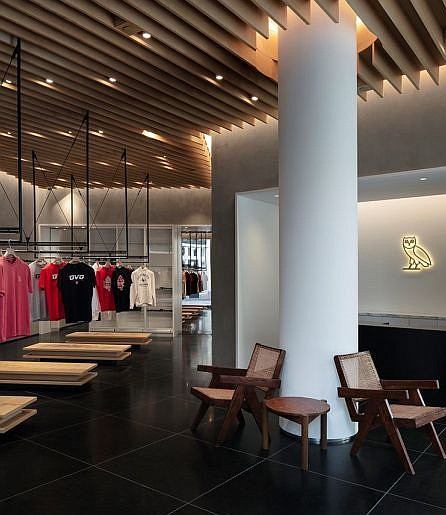 Interior of OVO flagship at The Grove. Image courtesy of OVO

OVO Flagship To The Grove

After a more than four year run on Los Angeles’ La Brea Avenue, October’s Very Own, a brand created by hip hop star Drake, moved its Los Angeles flagship around a mile away to The Grove retail center. The first business day for the new OVO flagship was Oct. 3. Its neighbors at The Grove include a Nordstrom, as well as stores for brands such as Sandro, Brandy Melville and Vince.

Construction for new OVO flagship was managed by Shawmut Design and Construction. Shawmut's other retail boutique projects include building flagships on Rodeo Drive in Beverly Hills, Calif., and Melrose Place in West Hollywood, Calif. The OVO shop's interior was designed in collaboration with Masamichi Katayama, the principal and founder of Japan-headquartered firm Wonderwall. Katayama’s firm gained noticed for developing interiors for shops for influential streetwear brand A Bathing Ape. Wonderwall also worked on the interior of OVO’s Tokyo shop, Katayama said. The Tokyo boutique influenced the look of the Los Angeles flagship Katayama said that there would be a uniquely Japanese look at The Grove store.

“Elements were limited to natural and neutral materials such as mortar, iron, stone, wood, and glass,” he said.