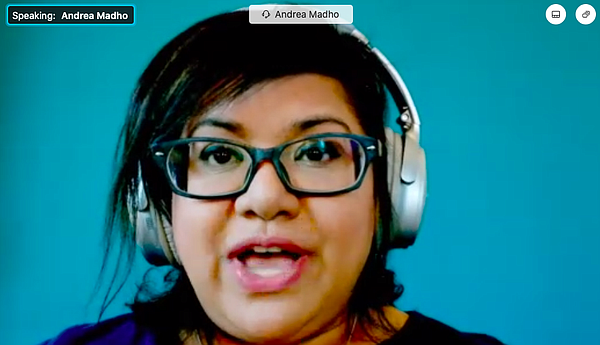 Entrepreneurs Forecast What Will Be in Factory of The Future

The entire business of fashion has been undergoing major changes in the past decade. The Virtual Symposium, a webinar series produced by the TechTextil North America and Texprocess Americas trade events, charted what may happen next with manufacturing. The Zoom panels were webcast on Oct. 7 and 8.

In “The Factories of the Future,” fashion’s future may lie in micro factories that make bespoke clothing, said Andrea Madho, chief executive officer and co-founder of Lab 141, a Brooklyn, N.Y.–headquartered online platform and startup company that produces small batches of clothing for its customers.

“The future of clothing manufacturing is, we believe, personalization and localized small-factory production,” Madho said. She forecasted that small factories producing made-to-measure clothes for individuals would help solve looming environmental issues such as the dumping of millions of garments in landfills. If clothes were manufactured with better quality, so many tons of clothing would not be thrown in the trash. “One hundred years ago, everything was made one-off,” she said. “You went to your local tailor or your local seamstress. One hundred years later, it’s how do we return to that in an efficient way using 100 years of development and technology?”

Another panelist, Eric Spackey, president and chief executive officer of Bluewater Defense, agreed that in the future small, tech-enabled factories would manufacture clothes specifically made for individual consumers. Bluewater Defense is headquartered in Puerto Rico and makes apparel for the U.S. military.

“On-demand manufacturing is the future,” Spackey said. “We’re looking at this for soldiers. A soldier will go to a recruiting station and get scanned. I will get the markers. I will actually produce the training uniform. Once it is produced, Amazon will deliver it to that training site. When that recruit is almost through with the training cycle, they’ll get scanned again because their body shape has changed. At that point, I’ll produce combat uniforms on demand for that particular individual. All is done online without any interaction other than that scan. The scan will become personal through that phone. So, you’ll be able to do it remotely.”

However, human workers will continue to dominate factory floors. Robot-dominated factories are something that won’t happen in the next decade, Spackey said. But artificial intelligence will be of growing importance, especially for manufacturers’ enterprise-resource-planning needs.

Another panel, “The Workforce of the Future,” also forecasted that increasingly automated factories would be staffed by people but added that human workers need to be better supported with training and living wages, said Jenny Guarino, chief executive officer of ISAIC—the Industrial Sewing and Innovation Center.

Another panelist, Sheng Lu, an associate professor of Fashion and Apparel Studies at the University of Delaware, said that people would pave the road to change. “The fashion industry has been changing dramatically because of COVID-19. One strategy of those changes is that we need to be innovative. But who can innovate? It’s people. We need to invest in people, not just machines,” he said.

Another panel discussed the future of fabrics. “Designing Textiles With Energy Functionalities” included academics on the panel discussing the research field of smart textiles, which will enable functions such as enhancing a wearer’s performance.