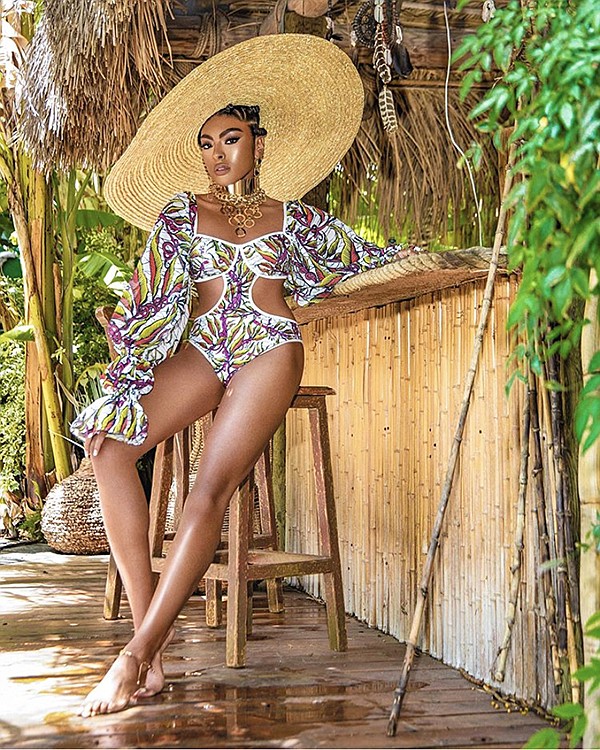 In a year that has been defined by the atypical, Paraiso Miami Beach looked toward 2021 as it hosted an event that blended the feel of a typical live Miami Swim Week with new virtual features. The regularly scheduled July edition of Miami Swim Week had been canceled due to the COVID-19 pandemic, yet event veterans decided the show should go on with an Aug. 20–23 schedule of fashion showcases that were held safely onsite and streamed virtually by brands including Agua Bendita, Beach Bunny, Vitamin A and Luli Fama. Also on the itinerary was a private, socially distanced dinner held in the Hyde Garden, where the Silvia Tcherassi Resort 2021 collection was unveiled.

The Paraiso Upcycle Challenge, which celebrates sustainable approaches to creating swimwear by working with students who are paired with swim-design veterans, hosted its second edition. For this edition of Paraiso, the award was bestowed on Normaillot-mentored Raquel Zerbib from the Miami International University of Art and Design.

The online marketplace Stitch Lab featured a selection of Latin American brands for buyers to engage with from any location. The session also featured input from stylists Omar Thomas and Mariela Ortega. Through working with its technology partner theCxn, Paraiso was also able to organize opportunities for buyers from around the globe to shop in virtual showrooms, a service that is still available to buyers to explore new offerings from Vitamin A, Dos Gardenias, Luli Fama, Agua Bendita, Ancora and Steam presented by Procolombia.

Miami’s Luli Fama celebrated its 2021 Diosa collection on the runway during a show that saw inspirational messages set across a backdrop exclaiming, “We Rise by Lifting Others” and “Be Your Own Muse,” as models walked the runway in designs that included lacing along the side, down the back and as a front detail on tops. The collection also featured unique cuts with strategically placed peek-a-boo details in the middle of bikini tops under the bust.

Some brands brought their swimwear beyond the runway. For responsibly made men’s swimwear brand Marwida, the Stockholm label invited fashion insiders to Miami’s SLS South Beach for a pop-up event on Aug. 23. During a live installation, a model lounged, sunbathed and dove into the hotel’s pool while wearing pieces from the brand as guests learned about the new collection and its sustainable-sourcing practices.

Laguna Beach, Calif.’s Vitamin Aapproached the swimwear event by featuring a video montage of user-generated content comprising footage submitted by the brand’s customers—real women who strutted and posed for the camera while wearing its RESP21 pieces. New to the collection that will launch in November, Vitamin A is introducing its recycled metallic shimmer, EcoRib and yarn-dyed recycled stripe created using recycled nylon.

Others, including Malibu, Calif.–based Dos Gardenias, featured campaign videos showcasing new styles in the brands classic cuts, which resemble ballet pieces, such as its long-sleeved single-piece suit with plunging neckline and its one- and two-piece square-neck designs.

New to the scene was Los Angeles’s LavieByCK, the inaugural swimwear collection from luxury designer Claude Kameni. Showcasing her brand during Paraiso was important to Kameni, whose pieces reflect her approach to modest yet sexy swimwear inspired by her family’s travel business in her native Cameroon.

“I still want to be sexy but not showing too much of my body. This collection is for people who want to still feel sexy without showing too much,” said the designer. “My dad owned a bus company that brought people to different places in Africa—Nigeria, Ghana. It really inspired me to create a collection where people could travel to any place in the world.”

While launching a swimwear line during a history-making moment such as this special edition of Paraiso might seem ambitious enough, Kameni also made her mark by unveiling her 2021 Voyage collection at the event through a virtual runway produced by The Diigitals, the avatar-modeling agency that featured an array of digital runway walkers. The Voyage collection is currently available in sizes XS–XL, but expanded sizing up to 2X will become available within a month, which was reflected by models of various sizes walking the virtual runway.

“It was amazing how they created my garments on the digitals,” Kameni said. “It was crazy.”

In addition to the Paraiso runway, Kameni’s pieces can be found in a campaign shot in Los Angeles during a session in a lush, idyllic backyard of a local home.

“We got out of lockdown. We finally put it on the models. We got a couple of models so we just went out to shoot it. It came out really beautiful,” she said. “We went for Bali in L.A.”