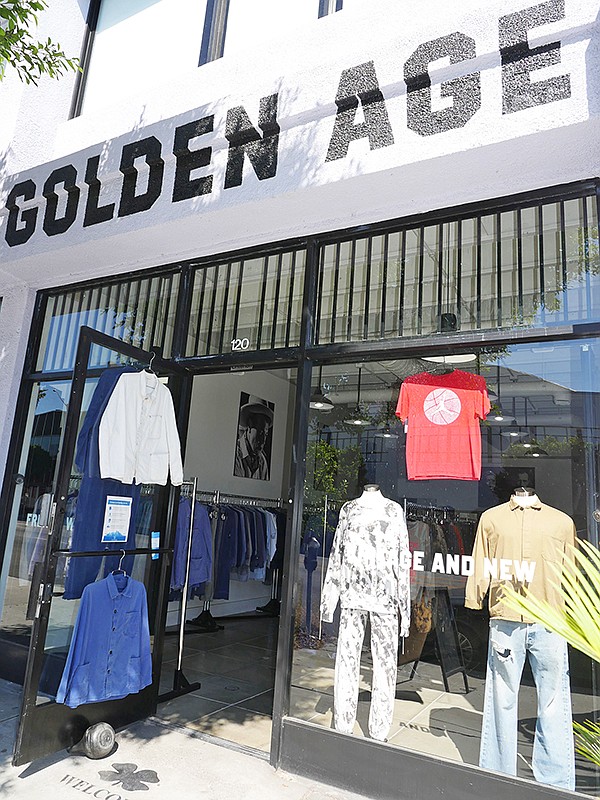 Similar to other major metropolitan centers across the country, Los Angeles’ retailers were hit hard by COVID-19 shutdowns and the fallout from looting stemming from social unrest. But many have rallied and returned to their jobs of selling fashion to the public. A group of retailers doing business on Los Angeles’ La Brea Avenue, in the Fairfax District and within the vicinity of West Hollywood, Calif., shared their stories of trends that are checking at the moment as fashion returns to doing business in a new retail landscape. 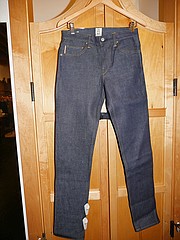 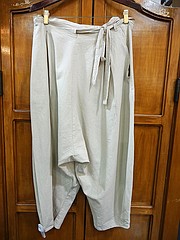 Mark Werts opened American Rag Cie on La Brea Avenue in 1985 when the street was a thoroughfare of used-car businesses and Orthodox Jewish synagogues. The synagogues still have La Brea addresses, but the strip of La Brea from West Third Street to Melrose Avenue has been a fashion street since the late 1980s. Going on 35 years in business, Werts said American Rag would continue to be an anchor of the street’s retail.

“It’s an act of love and passion,” he said of the store. “If you do things for money, you will never have it. Love and passion define success.”

Following the lifting of COVID-19 regulations for stand-alone businesses, American Rag reopened in June. Since then, top-selling items have been hoodies and sweatpants from Les Tien, said Orlando Reneau, the retailer’s buyer for denim and its men’s collection. Les Tien is manufactured in the Los Angeles area. Retail price points are $249 for a Les Tien hoodie and $146 for bottoms. Both feature oversized silhouettes.

“Everyone is looking for comfort,” Reneau said. A shelf with Les Tien styles has recently been placed at American Rag’s World Denim Bar, which is a sprawling American Rag section devoted to denim.

Also popular at the World Denim Bar is Kato, a jeans brand that is also made in Los Angeles. Manufactured using Japanese fabric, the brand’s denim has the look of raw denim but has four-way stretch for comfort, Reneau said. Popular styles are the slim-fit model, called The Pen, and the brand’s skinny fit, called The Needle. The brand’s retail price points range from $198 to $248.

Another denim brand doing well at American Rag is the Canadian label Purple. Price points for the high-end denim brand start at $260.

The main floor of American Rag features vintage clothing and veteran brands that American Rag has been selling for years, such as Stüssy and Comme des Garçons.

“We’re always looking for something new,” Reneau said. One relative newcomer to American Rag has been the brand Prospective Flow. It designs new styles for templates of traditional Japanese clothes. One style is the Japanese baggy and work bottom, called the Momohiki pants, which retail for $195. 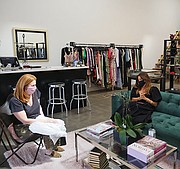 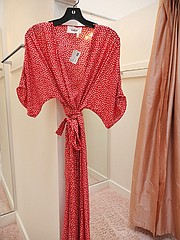 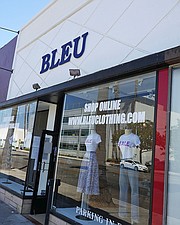 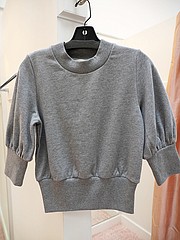 Veteran boutique retailer Gabrielle Zuccaro opened a new location for her contemporary women’s boutique Bleu in Los Angeles’ Fairfax District just a couple of days before the City of Los Angeles issued an order for businesses to shutter to stop the spread of COVID-19. She reopened on May 27 but had to close quickly because of social unrest in her neighborhood.

Since then, the Fairfax District has been coming back to life, and most of Bleu’s business comes from people dining at neighborhood restaurants and taking walks down the street, which winds past The Grove retail center. Zuccaro estimated that her August sales were down 40 percent compared to the same month the previous year, but she remained bullish that the Mid-City’s fashion business would enjoy a comeback.

“There will always be a need for clothes and accessories,” Zuccaro said. “When this is over, it’s going to look a lot like the Roaring ’20s. People will burn their sweatpants.”

Recent top-selling items at Bleu included the Giles pants made by the Cinq à Sept brand, retailing for $285. “They’re chic,” Zuccaro said. “They have an amazing waistband.”

Since Zoom meetings have been such a big part of COVID-19 life, stylish tops have been selling at Bleu. One of the most popular is the 3.1 Phillip Lim brand’s French-terry sweater with puffy sleeves, which retails for $225.

Some things would sell well if people were sheltering at home or not, Zuccaro said. One is the Gianni wrap dress by the Ba&Sh label, which retails for $395. 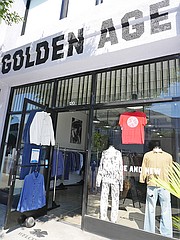 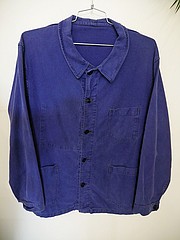 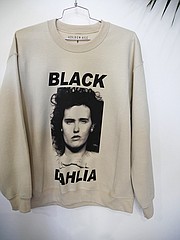 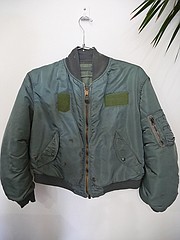 Growing up in France, Ludovic Orlando and Jesse Bardy were inspired by Hollywood films of the 1930s to 1950s. As adults, they paid homage to the Hollywood of Humphrey Bogart and Gene Tierney when they opened Golden Age, a high-end vintage shop and fashion brand, in 2017. A Golden Age location opened on La Brea in November 2019. It also runs two other locations in Hollywood.

The COVID-19 travel ban hit Golden Age hard. Orlando estimated that about half of the business came from international tourists and designers visiting Hollywood. Online sales of Golden Age’s vintage-inspired women’s footwear has paid some bills. Also popular are styles from the Golden Age apparel brand.

One collection of the brand’s sweatshirts pays tribute to the “Black Dahlia,” a 1947 crime that scandalized Hollywood and Los Angeles. Another silhouette is inspired by an oversized 1980s style of sweatshirt. The sweatshirts are made in Los Angeles and retail for $79.

The collection was introduced in March at the Noir City Film Festival in Los Angeles before COVID-19 shutdowns were mandated. Other Golden Age–inspired tops feature collaborations between the brand and different science-fiction and horror films.

Golden Age’s vintage specialties are a world away from Hollywood glam. It has cultivated a niche as a purveyor of classic French workwear. Think chore jackets and indigo work pants that were produced from the 1920s to the1950s. Retail price points range from $100 to $200 depending on the quality of the pieces, Orlando said.

Vintage denim, rare sportswear, military fatigues and camouflage also are a big deal at Golden Age. It sells 1950s- through 1970s-era fatigues from the United States military and European armies. Price points range from $80 to $300, such as an Alpha Industries flight jacket from the Korean War era that retailed for $200. 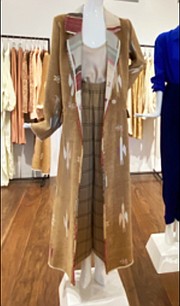 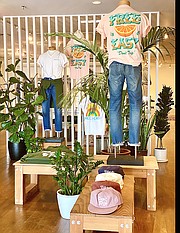 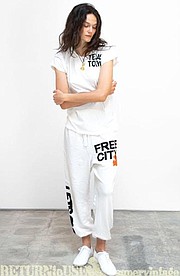 Since 1976, Ron Herman has served as one of Los Angeles’ pioneering boutique retailers. The shop’s staff used the downtime of the COVID-19 shutdown for a big remodel after the Gregory’s footwear store moved out of its space adjacent to the first floor of Ron Herman, which is a two-story shop.

Ron Herman’s women’s department expanded into the 1,200-square-foot space once occupied by Gregory’s. Ron Herman also opened a women’s and men’s shoe department on the second floor of the store adjacent to the men’s store, said James Quirk, Ron Herman’s director of operations. Quirk said that the new additions would not change the shop’s vibe.

“It still maintains the Ron Herman look and feel,” Quirk said. “It feels familiar to clients.”

Ron Herman closed for the COVID-19 shutdown on March 13. Then it closed down again on May 31 when unrest began on Melrose Avenue. Before the activity reached its block, the store boarded up its shop and hired extra security guards to guard its building, Quirk said. Windows were broken at the shop, but there was no major damage.

Ron Herman reopened in mid-June. Since then, the people shopping there have been longtime customers. Popular items have included Free City, a veteran brand, said Ami Lasser, director of women’s buying. Brightly colored sweatpants from Free City retail for $215.

Other brands selling well at the women’s store include Re/Done jeans, a line of repurposed denim and clothing. Retail price points range from $95 to $250 and up. Coats with a Navajo-inspired design by the Forte Forte brand have also been popular.

“It’s not a seasonal thing,” Lasser said. “If it’s special, they’ll collect it.”

Popular men’s items include $78 T-shirts from the Free & Easy brand, said Ruben Leal, the director of men’s buying. An upcoming focus for Ron Herman will be its self-named brand. It will offer store exclusives such as drop-shoulder crew-neck sweatshirts, which retail for $285, and a light-stretch chino pant, which retails for $220.