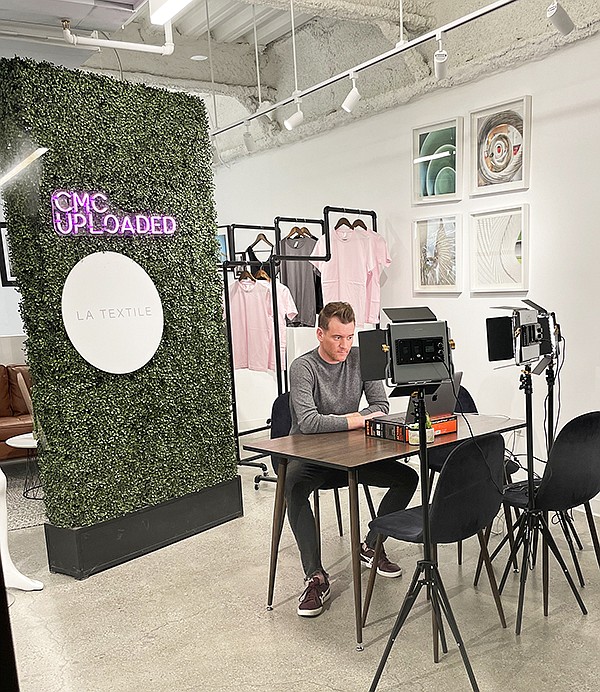 Building on its momentum from a successful October show, LA Textile was hosted Feb. 24–26 on CMC Uploaded, the California Market Center’s digital platform. This edition of LA Textile was a testament to the virtual production’s growth in only five short months. According to the CMC’s senior manager of events, Matthew Mathiasen, attendance figures for the show doubled from the October edition.

“Key points that we look at, show after show, all showed great improvement,” Mathiasen said. “Last October, which was our first virtual edition of Textile, we had between 700 and 800 attendees come through over the three days. This time we clocked in right around 1,400 over the three days.”

The pool of attendees included emerging designers and new brands as well as larger, corporate labels. This blend of designers from every career stage provided a similar composition of attendees as the on-site event.

“The attendees included everyone, from the small kids who are just starting—LA Textile has always been a home for them,” Mathiasen said. “We also saw our key big corporate brands show up. Even in an age of virtual, these corporate design firms are still showing up to our show, coming in, supporting exhibitors, meeting with them, writing orders and driving the ball forward.”

This February edition of LA Textile comprised brands from 40 states and 13 countries, which is extraordinary for a show that typically sees 70 percent of its visitors from the local area during the on-site production. This global expansion was a pleasant surprise for show organizers, who also revealed that within the mix of 28 exhibiting companies, 10 countries were represented. While LA Textile will continue to utilize a digital offering, show organizers are planning to return with an on-site show Sept. 29–Oct. 1 if local safety guidelines allow.

“Even after a year of this, talking with so many different brands, buyers and exhibitors across the board and other trade-show producers, we’re all saying that virtual isn’t going to replace live,” said CMC Events Director Moriah Robinson. “Buyers and brands have found ways to communicate better, which is great, but in-person is still everybody’s goal.”

Information sessions were organized to take attendees through the different stages of bringing a collection to life through trend reporting, sourcing through a responsible supply chain and a workshop on designing. Amid presentations from exhibitors who showcased their offerings, LA Textile also included a trend presentation from Peclers Paris on the first day, continued into the second day with Fashiondex’s Sustainable Fashion Forum and ended with a design-coaching workshop from Perspective Design on the final day.

“My goal is to get someone to show up all three days and visit all the exhibitors and really explore the entire show,” Mathiasen said. “We thought about this time with the seminars each day being a component of the full process of being a designer.”

Another milestone that the show reached during this edition was found within the event’s group of exhibitors, 100 percent of which offered a sustainable or ecologically sound product. While providing sustainable products is not a requirement to exhibit at the show, Mathiasen cited a growing adoption of eco practices by textile and notions producers.

“Somehow we ended up with 100 percent of our exhibitors with some form of an eco or sustainable offering in their collections,” Mathiasen said. “Even if it’s small, we’re seeing it grow and grow and grow in every single offering. That was my biggest takeaway because it’s special to me.”

The demand for sustainable sourcing was also noted by Pat Tabassi, product development and marketing manager for the Los Angeles–based fabric mill Design Knit. As part of LA Textile’s Exhibitor Spotlight Sessions, Tabassi led viewers through Studio DK, a line of textiles that is offered at smaller minimums but also affords a luxurious hand and ecologically sound options.

“It’s constantly of interest and something that is important to us as well. There was a huge interest in sustainability and the offerings that we have. More so than specific fabric, it was a lot of ‘How do you work?’ ‘What is the process?’” Tabassi said. “We are happy to connect clients with the supply chain.”

While Tabassi looks forward to returning to on-site trade events, attending the virtual edition of LA Textile for the second time was an enjoyable experience. She looks forward to being offered a model that is a hybrid of on-site and virtual shows as she views digital events as an opportunity to serve multiple partners at once.

“There may be times when I can’t be in another location or it depends on what your budget is,” Tabassi said. “Even though you can’t be somewhere in person doesn’t mean that you’re limited regarding how you can contact potential clients. I like this format very much. It feels like a conversation. It’s a very friendly format. It’s relatable. It doesn’t feel intimidating, especially to a new brand.”

Searching for knit vendors in Los Angeles, Magnus Alpha co-founder and Creative Director Hommy Diaz felt the virtual edition was an expertly produced alternative that he would welcome as a complement to the on-site show in the future.

“The virtual edition was extremely well done in regards to allowing designers to get a better understanding of the people behind the textile brands that exhibited there before and get a good breakdown of what a vendor offers,” Diaz said. “The advantage of this is that there were certain vendors that crossed over with what they offered and there were vendors that complemented each other.”