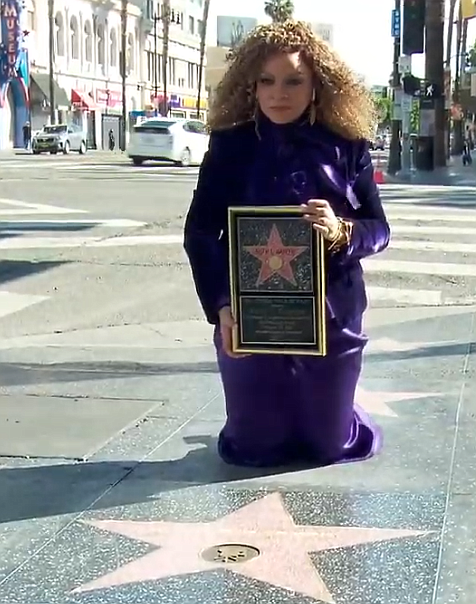 In honor of her costume-design career that has spanned four decades, the venerable Ruth E. Carter recently received a star on the Hollywood Walk of Fame. The ceremony for Carter's milestone was produced virtually due to threats from the ongoing COVID-19 pandemic, yet the Feb. 25 show went on with Hollywood Chamber of Commerce, President and Chief Executive Officer Rana Ghadban leading tributes with commentary from Oprah Winfrey and Eddie Murphy.

"Today, we are honoring an extraordinary woman who is revered in the motion picture industry as one of the most sought-after film costume designers of all time," explained Ghadban, who declared Feb. 25 as Ruth E. Carter Day in Hollywood. "Ruth wows audiences and dazzles critics alike with costumes inspired by traditional African tribalwear merged with a contemporary look delivering fashion and function, incorporating technology and creating such authenticity, ownership and empowerment for the characters and viewers, cementing her as one of the preeminent voices and experts on Afrofuturism."

The costume designer's vision has defined movies such as "School Daze," "Do the Right Thing," "Amistad," "Lee Daniel's The Butler" and "Dolemite Is My Name." Carter's work on the Ryan Coogler-directed "Black Panther" secured a 2019 Academy Award win, making her the first African American artist to win an Oscar for best costume design.

"Ruth Carter is a genius. Of all the movies I've done over the years, I've never had a wardrobe designer whose clothes actually influence how you play your character, how you walk or how you stand. She really is instrumental in bringing your characters to life. There is no one like her," said Murphy. "There is always a sense of comfort when you walk on a Ruth Carter set because you know you're going to be the best."

This star in the category of Motion Pictures represents the second star awarded to a costume designer since the Walk of Fame's creation in 1960. Carter's star is the 2,694th dedicated on the Walk of Fame. Footage of the ceremony can be viewed through walkoffame.com

"Her passion for clothes, for clothing, and costumes and design were matched by her intention in creating a nuanced portrayal of a Black family through the decades," said Winfrey, who worked with Carter on multiple projects. "What I first observed on [the set of] "The Butler" and then again on "Selma" was a woman who was deeply intentional about creating clothing to represent the culture and journey of African Americans."

Prior to moving to Los Angeles in 1986, Carter worked in Springfield, Mass., her hometown, and also accepted an internship with the Santa Fe Opera. During her career, Carter has worked with legendary directors including Spike Lee, Steven Spielberg and the late John Singleton.

"To all my fans who enjoy my movies and see themselves so much so you show up dressed in costume it's my desire to continue to inspire you," Carter said during the ceremony. "Most of all, I dedicate this star to all the young aspiring filmmakers. I drove to Hollywood 36 years ago in an '85 Volkswagen Rabbit—no A.C., no airbags, no G.P.S.—nothing was handed to me. Every moment, every sacrifice, every effort was hard work inspired by my passion. It's my hope that anyone who sacrifices, who beats these streets of Hollywood carrying their dreams in heavy garment bags full of costumes, desiring to be the best like I did that when you gaze upon my star, feel my energy, feel the power of your own unique story to realize your dreams, so you too can reach your star. Wakanda forever."

Carter's work will next be seen in the March 5 premiere of Murphy's film "Coming 2 America," the follow up to the 1988 comedic classic "Coming to America."