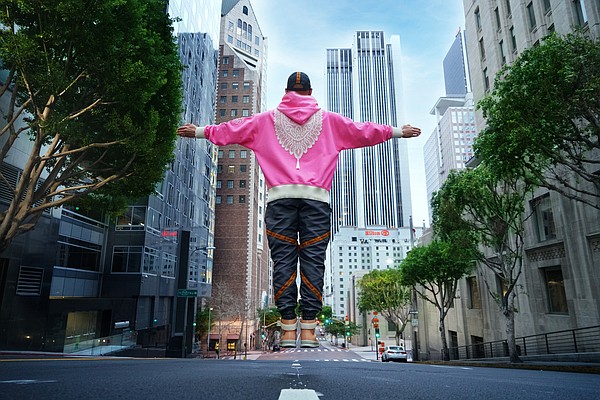 Magnus Alpha co-founder and Creative Director Hommy Diaz released the Doily Hoodie during March, which is Women's History Month, as an homage to "the women who raise us," the designer said. Photo: MJ Glover

During Women’s History Month this March, Magnus Alpha co-founder and Creative Director Hommy Diaz wanted to release a special piece to honor the female caregivers who accept the lifelong task of raising a child. The result was a limited-edition Doily Hoodie that is designed, cut and sewn in Los Angeles.

“March is International Women’s History Month and I could not think of a better way to visually celebrate and honor the women who raised us,” Diaz explained. “The Doily Hoodie (el mantel de mami) is a unisex limited-edition cut-and-sew piece designed and produced in Los Angeles under my label Magnus Alpha.”

Through manufacturing the pieces locally, the new hoodie collection supports Diaz’s commitment to the local economy. It also speaks to the fashion veteran’s desire to showcase the skilled apparel-making prowess of the region’s clothing-industry workers, particularly those who are immigrants, according to a company statement.

“I am forever inspired by the female role models in my life. As a product of immigrants, raised by parents from the Dominican Republic, one design motif that has stood the test of time is the coveted table-top doilies,” Diaz said. “They were a staple in the homes of my grandmothers, aunts and my childhood home in Queens, New York.”

Available in hues of Rosalia, a pink, and Azulito, a blue, the hoodies are made in a 100 percent cotton French terry knit that is milled in the United States. The contrast front-to-back off-white doily-style is reminiscent of the home décor pieces that would be used as surface protection under food dishes, floral arrangements and on sofas. Cotton-poly bias trim is featured around the hood and the kangaroo pocket, with a cocoa hue contrasting the Rosalia hoodie and a maize color on the Azulito. The left shoulder of each piece features an embroidered lion’s head—the Magnus Alpha logo.

“The color palette I chose was inspired by a history of adolescence. Until the mid-19th century pink was for boys and blue was for girls. Boys were dressed in pink as it was associated with the masculine color of red. Girls were dressed in blue associated with the Virgin Mary,” Diaz explained. “It’s both exciting and humbling to see in fact a growing number of guys who have already ordered the pink hoodie and the growing number of ladies who have ordered the blue hoodie”

Doily Hoodie pieces are sized S–XXL. Each piece is sold at a direct-to-consumer price of $165 through magnusalpha.com/collections/all#apparel under a pre-order model that requires all requests be submitted prior to March 26 for delivery before the end of the month or March 31 for shipping into April. The company is also offering an interest-free payment-plan option through the alternative-payment platform Sezzle.