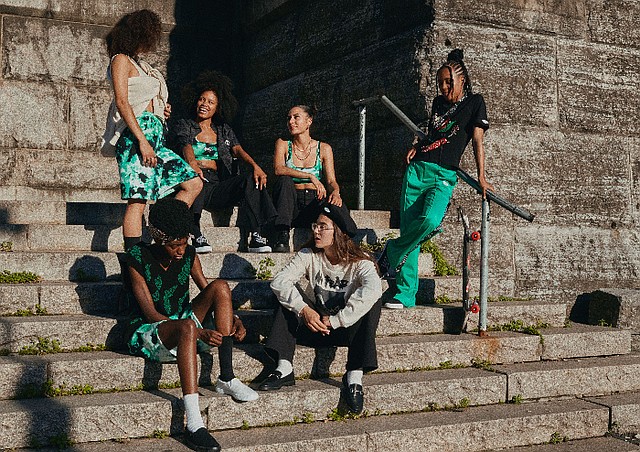 For Fall 2021, H&M has announced a collaboration with iconic American skate and streetwear brand No Fear to release a new capsule that pushes for inclusion and equality.

Reaching peak popularity in the 1990s and early 2000s, the new relaunch of No Fear takes on a more modern, female perspective that features The Skate Kitchen, an all-female crew based in New York who feature as the co-creators and stars of the campaign. The Skate Kitchen speaks up for inclusion and aims for a more equal world for everyone, beginning with the male-dominated world of skateboarding.

“Together, they speak up for inclusion with the aim of a better and more equal world Fearless in the face of new challenges, The Skate Kitchen is willing to try out new things and own it,” added Rachelle Vinberg, a member of The Skate Kitchen. “Everyone is scared, but the No Fear mindset is to look fear in the eyes and go for it.”

“It feels amazing to relaunch No Fear with the collaboration with H&M and co-create some pieces with The Skate Kitchen. We're especially proud to add our voice to the next generation, encouraging them to be themselves and fight for what they believe in with a 'No Fear' ethos backing them up,” said Hamish Morjaria, head of brand partnerships and licensing at No Fear.