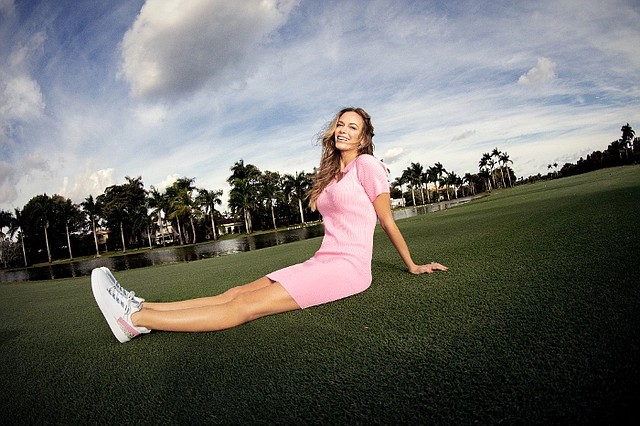 Steve Madden has announced the release of their first golf shoe. Jena Sims has been tapped as the face of Steve Madden Golf 2022 and the first collection features three styles, including the "Jena." Image: Steve Madden

The new golf shoe line features three styles and many of the shoes are inspired by current Steve Madden shoe designs including the “Jena,” named after Jena Sims, the face of Steve Madden Golf 2022 and fiancé to PGA player Brooks Koepka. Other styles include the “Fore” which is a take on a more traditional golf shoe and the “First-T,” an updated golf-inspired take on Steven Madden’s popular “Maxima” sneaker which was pitched by Sims.

The Steve Madden golf shoes feature a spikeless design allowing them to be worn around the house as well as on the golf course. The new line prioritizes style and affords a different option when on the course.

“We didn’t set out to create a high-performance golf shoe,” Madden said. “I wanted to make stylish shoes for women that you could play 18 holes in, but also rock off the course.”

Growing up a fan of golf, Sims said she wants the collaboration with Steve Madden to be an entry point for her to break int the golf fashion world as she’s often seen at tournaments.

“One of my big goals is to break more into golf fashion because my posts on Instagram, they’ve really taken off because people like to see what I wear to golf tournaments because that’s my number one question in my DMs — other than anything about Brooks — the number one question about myself is like, ‘I’m going to the Masters this weekend, what do I wear?'” Sims said.

The collection is available at stevemadden.com with prices ranging from $99.95 to $129.95.