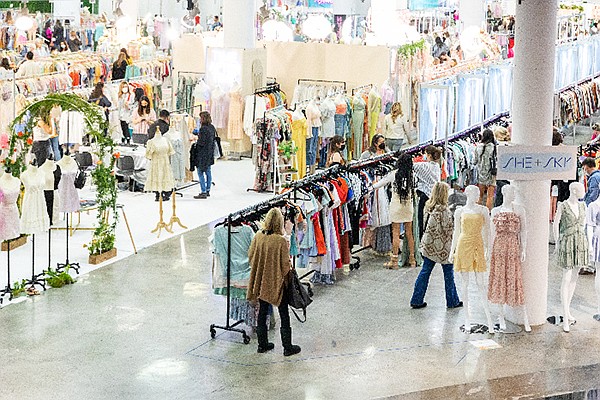 Atlanta Apparel’s first market event of 2022 broke attendance records and saw the most visitors to a market since 2016. Buyers were able to source products for Spring/Summer as well as get a head start on the Fall season. | Photo courtesy of Atlanta Apparel

Atlanta Apparel’sfirst market of the year, which ran Feb. 1–4 at AmericasMart, brought the largest number of exhibitors and retailer attendees to a February show since 2016. The event also showcased the largest-ever number of temporary exhibitors and showrooms as well as buyers sourcing an increased amount of product for the Fall season.

Attendance grew over 10 percent from February 2021 and saw continued increases in attendance of buyers from the Northeast while still performing well with buyers from the Southeast, Midwest and Southwest in addition to international buyers.

Brad Hughes & Associates has been in business for 32 years in the Dallas area but wanted to branch out to reach more and different markets and customers. Hughes, CEO of his eponymous operation, attended the Atlanta market for the first time and reported great success for the brands showcased, leading Brad Hughes & Associates to commit to attending the next Atlanta market in April.

During the show, Hughes showcased the L.A.-based Black Halo; Emily Shalant from New York; Bariloche out of Madrid; Vintage to Vogue, an accessories company from Michigan that designs upcycled jewelry; and Josie Bruno Vintage, which creates upcycled and embellished army jackets. Vintage to Vogue and Bariloche were new to Atlanta as well. Hughes also noted that most of the brands he works with are specialty-store driven as opposed to majors and department stores and that this was a big selling point that customers love.

“The retailers at Atlanta were excited to see something new. They’ve been looking for the next new thing, so we received a great response. And everyone was very complimentary, friendly and inviting, so we’re coming back,” Hughes said.

Hughes mentioned embellishment as an important part of upcoming fashion trends, and the customers that gravitate to it are ones who want to be noticed when they walk in the building.

“It’s all about novelty, embellishment and good fabrics as well as quality and elevation. Those are words we use a lot. As fashion is at all different levels of price points, we’re focusing on the elevated part of the equation,” Hughes said.

Cary Hack, sales representative for Marc Fisher LTD, said it was great to see the large number of retailers that attended the event.

“This is the third time I’ve gone, and I continually pick up significant customers every time I go. Our order base gets larger and larger each time, so it’s been a really great show. The customers have thanked me for attending because we usually attend shoe shows and not apparel shows, so it’s nice to offer variety,” Hack said.

“Two other big draws are the cash-and-carry business. In the boutique business, we’re always looking for great deals and really good opportunities, and they have probably the best setup I’ve seen at a market for the cash-and-carry businesses,” Novell said. “The other business we pursue at market are the temporaries. It gives us a really good opportunity to see the product in person and really select things that you wouldn’t normally get to buy because they wouldn’t normally have reps that will visit our boutiques throughout the country.”

Novell said there was a good mix of product for both Spring Immediates and Fall preorders. Many of the trends for Fall were similar to trends from last year but with updated details. She also mentioned that color remains popular now as people are looking to fashion to help lighten the mood over the past couple of years.

“Everything is staying with colors being predominant as opposed to the blacks and grays that were popular prior to COVID. We’re definitely seeing a trend toward color—even stores that used to sell mostly black are now selling a lot of color. People want to be happy post-quarantine, so that has maintained a foothold,” Novell said.