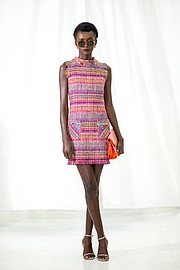 All roads lead back to a friend in Mexico for the Kevan Hall Spring/Summer 2023 Hotelito collection, which was inspired by the life of interior designer Jenny Armit and her inviting refuge in the artists’ enclave Todos Santos, Mexico. When visiting Armit’s Hotelito boutique hotel, Hall was struck by the colorful features found within the property—on its structures, among its flora and the ways in which the hues transitioned according to the position of the sun throughout the day.

“There is a fuchsia wall with cacti that run along the bottom. There is a lime-green wall and different shades of green walls. And [persimmon] orange walls. And lavender walls. Every wall could be the side of one of the cottages or just a wall that houses a swimming-pool area,” said Hall. “When I drove onto the property it was a feast for the eyes—all these spectacular colors that are drenched in the Mexican sunlight.”

While this setting provided the color palette for Hall’s collection, which recently showed at New York Fashion Week, Armit’s life story inspired many of the silhouettes that Hall would feature in Hotelito. The friends discussed Armit’s life, from growing up in Great Britain during the cultural shifts of the 1960s and 1970s to finding her calling as an interior designer with a global following. Eventually, Armit opened the property in Mexico where guests enjoy beautifully appointed accommodations and luxurious amenities but also mingle with the rescue animals who live on the grounds. Each of these experiences informed Hall’s collection.

“[Armit] was telling me about her youth in England during the ’60s and ’70s and all of her cool English friends. I thought about her in miniskirts and hot pants and later on in life, during her middle years, as this super-chic, highly successful interior designer doing huge projects all over the world,” said Hall. “Now she has settled into this little village where she enjoys hosting guests in her warm and inviting hotel, caring for her animals and quietly doing philanthropic work to support the underserved community.”

While Hall achieved his signature elegance with the Hotelito collection, the designer also chose bold expressions of bright colors that make each piece pop. These colors define Hall’s collection as he incorporated the property’s bright colors into solid pieces in alluring combinations such as a coral lining to complement hot pink or azure blue paired with a cerulean lining. Fabrications for the collection include Donegal tweed but with neon flecks of intense color threaded through to update the sheath dress and suiting comprising distressed-fringed hot pants in place of traditional trousers.

Cottons were embroidered and cut to resemble the appearance of lace for shirting. Stacked sequins yielded elegant looks in a saturated-persimmon strapless mini cocktail dress and a yellow jumpsuit with cargo pockets, which were a utilitarian feature that Hall applied to a number of pieces including formal gowns. Hall’s finale piece featured bugle-bead fringe in all the vibrant colors of the collection atop a cerulean halter gown.

Within this collection, Hall also incorporated the elements of American classics for which he is known. Many of these elements have become signature characteristics of Hall’s time designing for his eponymous brand and time spent as the creative director at Halston.

“There are certain things that I love and I put in this collection that speak to American sportswear. One of the pieces is an organza trench coat, which I’ve done many, many times. I’ll throw a trench coat over an evening gown in two seconds, and I love to do it in taffeta. I love to do it in satin. I do them in everything,” noted Hall. “This time, I did it in organza, which I had done probably 25 years ago when I was at Halston as the director there.”

This collection also served as Hall’s debut of a capsule handbag and belt collection comprising Italian leather and a KH logo. Bags feature perforated details, while the reversible belts played a major role in the show with color combinations including chartreuse and turquoise, persimmon and yellow, pink and coral, and black and white.

While Hall sought to design a collection that was flirty, he also wanted it to exude a sense of sophistication. The collection was not only nodding to Armit at every stage of her life but also provides opportunities for women of all ages and sizes to feel empowered and unafraid to take risks with the bright colors of the collection, which Hall hopes evoke joy.

“What I really love about this collection is that every life stage can find something that speaks to their style. It will address a girl who wants to go out and party and have a good time with something flippy and sexy. And it’s going to speak to that very chic woman who goes to board meetings, has charity work and wants to look polished in the afternoon into dinner,” said Hall. “Then it’s going to look to that woman who has a very active social life where she is going to lots of dinners, galas and parties, and it takes us to the red carpet.”