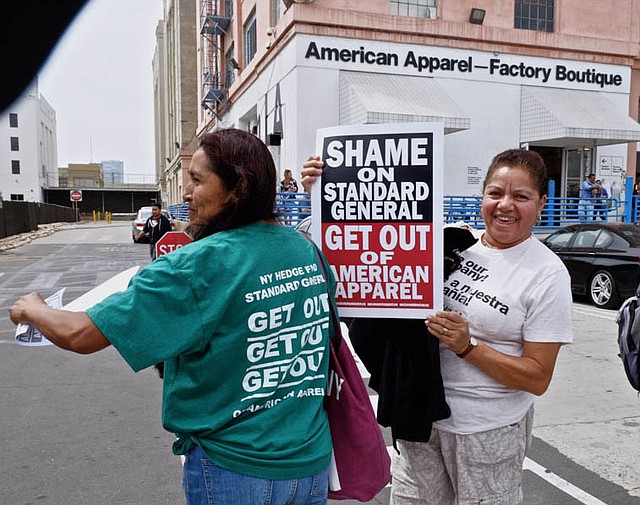 In more legal shots fired in the ongoing battle over control of American Apparel, the dismissed clothing company’s founder has filed two lawsuits in less than one week accusing American Apparel and hedge fund investor Standard General of defaming his character in false accusations and letters.

Charney, who founded American Apparel in 1998, was ousted by the company’s board of directors last December as the chief executive officer. He has been fighting to return to the company ever since.

In the latest lawsuit, filed May 12 in Los Angeles County Superior Court, Charney accuses American Apparel and the company’s chairman, Colleen Brown, of defamation. The lawsuit centers around a letter Brown sent out on April 24 to all American Apparel employees.

Charney, in his lawsuit, claims these statements are false and that he never agreed in writing or otherwise that he would not return to work at American Apparel. “Charney did not agree to never seek reemployment with American Apparel, nor is American Apparel otherwise contractually or legally precluded from re-hiring him in any fashion,” the lawsuit maintains.

Court documents point out that at the end of last year, American Apparel’s board of directors offered Charney “a multi-million-dollar executive consultancy position.”

Charney also claims in court documents that American Apparel and Brown “improperly accessed Charney’s personal and private mail messages relayed through company servers, obtained his highly personal and private photographs and videos, and leaked them to media outlets to personally embarrass and pressure” him to drop his various legal claims.

Charney is asking in the first lawsuit for $20 million in damages plus attorney fees.

In a second lawsuit, filed May 7 in Los Angeles County Superior Court, Charney alleges that hedge fund investor Standard General said it would defame Charney’s character if he didn’t give up control of his American Apparel stock. In that lawsuit, he is asking for $30 million in damages. Neither lawsuit had been served, American Apparel sources said.

Following his suspension in June and while an investigation was being conducted, Standard General helped Charney buy additional stock in his attempt to return to American Apparel. Between the two of them, the hedge fund and the former CEO both control Charney’s 42 percent stake in the company’s stock.

Charney maintains in court papers that, in December, American Apparel’s board of directors abruptly and unlawfully terminated him as the chief executive officer following the investigation into alleged misconduct. “Charney’s termination was part of the board’s then-secret plan to wrest control of the company away from Charney,” he said in court papers.

“At the company’s annual meeting on or around June 18, 2014, American Apparel’s board of directors presented two options to Charney. Under the first option, Charney could resign his position as CEO and chairman of the board and sign over to the board the voting right to his then–47.2 million shares in exchange for which he would receive a multi-million-dollar severance package and remain with the company as a consultant.

Charney also claims in his lawsuit that Standard General had promised they would help him “reassert control over American Apparel and push out the renegade board members who had unceremoniously ousted him from the company he founded nearly 20 years earlier.”

“The parties [Standard General and Charney] quickly entered into a series of agreements with the express purpose of placing Charney back in control over American Apparel as its CEO,” court papers said.

“[Standard General] promised Charney that he would be reinstated as CEO unless the investigation revealed something profoundly egregious of which Standard General was unaware,” court documents said.

After Charney was fired in December, veteran apparel executive Paula Schneider was named to replace him.

In response to the lawsuit, a Standard General spokesman said, “Dov Charney and his associates continue to file frivolous, meritless lawsuits at a breakneck pace. The facts speak for themselves, and we are confident that Mr. Charney will be held accountable for this knowing, intentional abuse of the legal system.”

Several other lawsuits have been filed in the last month by American Apparel shareholders who used to work for the company or are Charney’s friends, claiming that the board sent out false proxy statements saying they supported the American Apparel founder when they were allegedly plotting to get rid of him.

“Dov Charney, Dov Charney’s lawyer and other people related to Dov Charney continue to bring claims that are wrong on the facts and wrong on the law. Each of these claims is rooted in the same exact agenda,” an American Apparel spokesperson said.

“These meritless claims serve as public-relations opportunities now, but they will each fail the test when put before a judge. American Apparel’s new management is focused on restoring the financial health of the company and does not intend to waste time addressing each of these meritless claims in the court of public opinion. We are confident we will succeed on every one of these in the proper venue.”