The Village At Westfield Topanga Aims to be Alternative For Everyone

BEFORE THE DEBUT: Rosie Tenison, co-owner of Varga, works on the build-out of the Varga flagship at Village at Westfield Topanga. 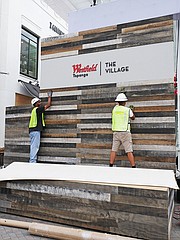 WORKING IT: A temporary barricade is installed at The Village. 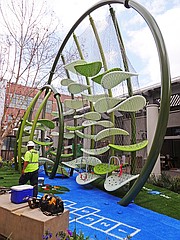 FOR KIDS: A Luckey Climber installation, named for its designer and architect, Thomas W. Luckey, was placed at the kids’ area at The Village.

PARKING: J.D. Luxe, a mobile store, will open a permanent shop in a truck at The Village. 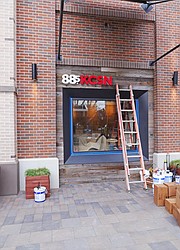 LISTEN: KCSN, a public radio station, will run a satellite studio at The Village, where it will conduct live broadcasts and produce musical performances. 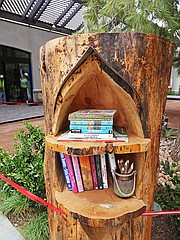 READ: The Village installed a handful of book exchanges at the retail center.

When The Village at Westfield Topanga takes a bow on Sept. 18, the $350 million project, adjacent to the luxe Westfield Topanga mall, will seek to be the artsy, dog-friendly, gourmet downtown area that Los Angeles’ San Fernando Valley never had, said Larry Green, Westfield’s senior vice president for U.S. development.

The Westfield Topanga mall is the address of luxury department stores Neiman Marcus and Nordstrom as well as major international retail nameplates Louis Vuitton, Gucci, H&M and Forever 21. However, The Village will serve as its boutique-focused sister retail center, Green said.

The open-air retail area will feature tree-lined pedestrian areas with benches, fire pits, fountains, a koi pond, a children’s play area, a bocce ball court, book-exchange kiosks and places where pets can get a bowl of water.

KCSN, a public radio station headquartered at California State University Northridge, located a couple freeway exits away from the mall, will run a satellite station at The Village. It will also produce musical performances at the park-like retail area, Green said.

“We want to be a hangout and retail destination for the Valley,” Green said. “You don’t have to shop. You can just hang out.”

M.Fredric, a 35-year-old contemporary boutique chain that is headquartered in the Valley, will open its ninth location at The Village. Varga, a women’s contemporary boutique chain, will open its sixth and biggest store at The Village, said Rosie Tenison, cofounder and co-owner of the chain, which takes some inspiration from pinup girls of the mid-20th century.

The Village also will be the address for Los Angeles–based men’s fashion line Gemelli and a fashion truck, J.D. Luxe. The mobile retailer will park its FedEx-style truck toward the edge of the mall. Consumers will walk into the truck and try on clothes from emerging Los Angeles retailers, said Jordana Forteleza, J.D. Luxe chief executive officer and creative lead director.

“We want to showcase exclusive items that no one else can find,” she said. Westfield executives gave J.D. Luxe a lot of creative independence in the design of the unique fashion truck, she said. Since starting business four years ago, J.D. Luxe had done business at temporary sites and its e-commerce site (www.jdluxefashion.com).

“Now we are part of a big brand,” Forteleza said. “It will help us with more exposure that way. It will funnel in more revenue than a mobile truck,” she said. She forecast that the mobile boutique’s sales will be $2,500 per square foot.

But The Village’s boutique culture also will take its place among higher-profile retailers, including Eddie Bauer and J.Jill boutiques. Gap Inc.–owned athleisure brand Athleta will be located across an aisle from Fabletics, an athleisure line recently started by the actress Kate Hudson. It also will be the home to emporium-sized big-box retailers REI and Costco. The 154,000-square foot Costco sells gas, groceries, pharmaceuticals and clothes, and it opened on Sept. 11.

Fred Levine, cofounder of M.Fredric, said it was good to locate his shop at a retail center with a diverse tenant roster. Also located at The Village will be a 24 Hour Fitness gym; craft gastropub Eureka!, which is headquartered in Los Angeles County’s South Bay; Blushington, a Los Angeles–headquartered makeup and beauty retailer and salon; a Wells Fargo bank; and UCLA Health medical offices and urgent care affiliated with the University of California, Los Angeles.

Levine expects the mix of whimsical retailers to high-profile nameplates and service retailers will draw shoppers from across the Valley. “It’s the finest collection of entertainment, shopping and service merchants on this side of the hill,” he said, using a neighborhood reference for the West Valley. “It creates a place to hang out like the fabulous Caruso center in town,” he said, referring to The Grove mall in Los Angeles. “It is just what the Valley has needed for a long time.”

Building hangouts have increasingly become the choice for developers over regional shopping centers and big-box centers, which were the most popular shopping centers in the recent past, said Larry Kosmont, president of Kosmont Companies, a downtown Los Angeles–headquartered economic and real estate advisory firm.

“The trend is to put money behind event and experiential retail,” Kosmont said, referring to unique and locally rooted boutiques as well as unconventional tenants such as gyms. “It is not formulaic, but it appears to be working. They are using restaurants as anchors. They used to have SoulCycle [fitness studio] as an anchor,” he said.

Kosmont began his career in the public sector and worked as city manager for municipalities such as Santa Monica and Burbank, Calif. Until 2009, many city managers hoped to bring big-box retailers and their strong sales-tax machines into their city limits. But with the skyrocketing success of e-commerce, many consumers buy online the goods they once purchased at bricks-and-mortar big-box stores.

“They’re competing with the Internet,” Kosmont said of lifestyle malls with new experiences. “They’re making places where people go to have an experience. It is defined by what you can’t get on the Internet.”

More remodeling is scheduled for Westfield properties. The Australian-headquartered company plans to spend $2 billion remodeling its properties across the globe. In August, ground was broken for a remodel of Westfield Century City in the Los Angeles area.

A Westfield statement said that a remodel of Westfield UTC in La Jolla, Calif., would transform the property into the company’s flagship retail destination in the San Diego area. It will feature a Nordstrom and 250,000 square feet of additional retail space. The remodel is expected to be completed in 2017.